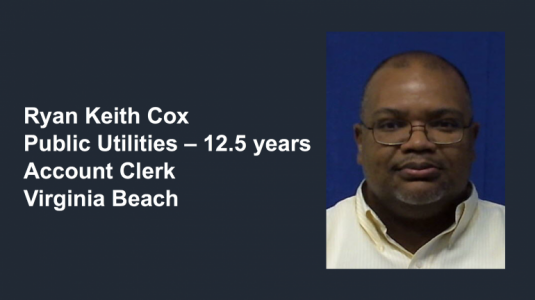 VIRGINIA BEACH — Ryan “Keith” Cox will forever be known as a hero after survivors of the May 31 mass shooting credited him with sacrificing himself while directing others to safety — a bipartisan bill to name a post office in his honor is making its way through the legislative branch.

Before his tragic death, Cox had worked as an accounting clerk for more than 12 years and was the employee who’d train three new hires.

Even so, Cox’s supervisor rated him poorly on his evaluations requiring him to “keep track of everything he did every day,” said James Allen, president of the Virginia Beach Interdenominational Ministers Conference and a member at Cox’s church.

For the last three years, Allen said he had heard stories from Cox “about unfair treatment at his job,” and noted another woman who had gotten fired after speaking out about a supervisor she didn’t like.

“You said you want to find out why we’re here, that’s why,” he said. “[The shooter] didn’t just wake up and go crazy one day.”

Allen was one of the 15 community members who publicly addressed Hillard Heintze at their first listening session Monday night — out of 15 speakers, nine hoped the investigators would dig deep enough to find what employees thought to be a “toxic work environment” primed for violence.

One woman who identified herself as a city employee stood and said “it’s really bad in that we weren’t surprised when this happened — it’s sad.”

Gary McCollum, a former military intelligence officer who also attended church with Cox, asked the investigators to take the sentiment one step further pointing out the “elephant in the room.”

“This was an African-American man who did this and I didn’t hear all the expertise that you talked about but there needs to be some expertise that deals with race relations,” he said.

“We believe that there’s a correlation between this toxic work environment particularly around people of color the fact that we have several key African-Americans in this city who’ve been targeted by audits and now they’re not here, they’ve been fired.”

Kenneth Bouche is Hillard Heintze’s chief operating officer and said “when we have specific examples of behaviors that rise to that level that is really important for us to hear.”

Other concerns from the community included addressing physical safety measures, training for Human Resource directors to recognize “red flags,” the city’s perceived lack of cooperation with the investigation, and how the firm’s recommendations will be implemented after they are discovered.

“We don’t have the power to force anyone to implement the recommendations but [the residents] do, you truly do,” Bouche said. “I’m optimistic and believe as the truth starts to come out and people start to see opportunities for improvement, I think you have a great path forward but it’s not one anyone can sit back and expect someone else to take care of, you’ll have to remain engaged and keep pushing forward.”

About 40 community members gathered at the Convention Center Monday night in the first of two listening sessions with Hillard Heintze, the firm contracted to investigate the May 31 mass shooting — the next session is Aug. 8 at 7 p.m.

According to the firm’s submitted proposal, the meetings with the community are part of its “listening and learning on-site” phase to be accomplished in the first two weeks of their 12-week plan.

Another separate meeting with city employees is scheduled for Tuesday.

The investigating team is encouraging the public to submit any information they think may concern the tragedy via email, VirginiaBeach@HillardHeintze.com, or phone, 877-208‐5650.

The second phase and working phase of the review is expected to last eight weeks with the final phase, “key findings, recommendations, and presentation of final report,” occurring during weeks 11 and 12.

Other elements of the first phase include:

York County Board of Supervisors Begins the 2023 Budget Process