Blast from the Past: Patrick Henry hits British loyalists in their pocketbook 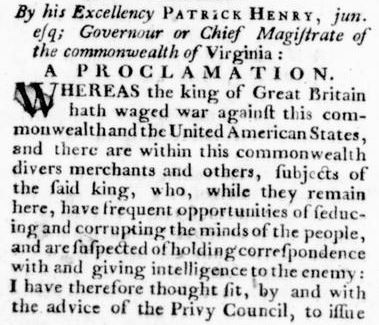 In this proclamation by Virginian patriot and founding father Patrick Henry wrote of the threat of remaining native Tory loyalists spying on behalf of the enemy. Henry’s quid pro quo action was both a counterstrike against the British embargo which began Jan. 1, 1776, and a preventive measure to protect the fledgling Republic.

By his Excellency PATRICK HENRY, jun. esq; Governour or Chief Magistrate of the commonwealth of Virginia:

WHEREAS the king of Great Britain hath waged war against this commonwealth and the United American States, and there are within this commonwealth divers merchants and others, subjects of the said king, who, while they remain here, have frequent opportunities of seducing and corrupting the minds of the people, and are suspected of holding correspondence with and giving intelligence to the enemy:

I have therefore thought fit, by and with the advice of the Privy Council, to issue this my proclamation, in the name of the commonwealth, hereby strictly requiring and enjoining all natives of Great Britain, who were partners with, factors, agents, storekeepers, assisstant storekeepers, or clerks here, for any merchant or merchants in Great Britain, on the 1st day of January 1776, the time the act of the British parliament for restraining the trade of America.

And seizing our property upon the water, took place, to depart this commonwealth with their goods, within forty days from the data hereof, except such or the said natives as have heretofore uniformly manifested a friendly disposition to the American cause, or are attached to this country by having wives or children here, agreeable to a resolution of the General Assembly in that case made, to the statute staple of the 27th of Ed III. chapter 17th; in conforn I do hereby notify to all such persons, they are at liberty, in the mean time to sell and dispose of their goods and merchandise to any person or persons who by willing to purchase the same.

Given under my hand, this 3d day January, in the first year of the commonwealth, in the year of our Lord 1777.