City officials have identified the Capitol Landing Center as ripe for redevelopment and have approved $770,000 to purchase the parcel as soon as this summer.

According to Michele DeWitt, Economic Development Director for the City of Williamsburg, City Council has entered into a contract to purchase the site at the intersection of Capitol Landing Road and Merrimac Trail. The center is home to a DMV building, Commonwealth Insurance Center, and a Spanish convenience store, Bodega Rio Bravo.

“[It] is the last piece of those parcels that council identified many many years ago as key to revitalizing Capitol Landing Road,” DeWitt said in last week’s city Economic Development Authority meeting.

The city’s Northeast Triangle- which includes Capitol Landing Road- is an area highlighted by City Council as ripe for business investment and economic redevelopment in the city’s biennial Goals, Initiatives and Outcomes. 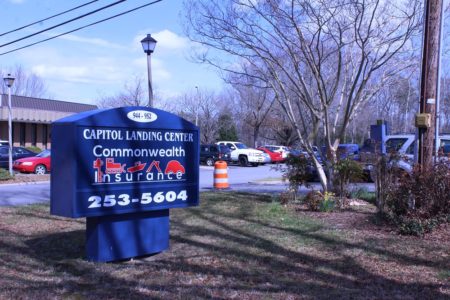 Lee Ann Hartman, the city’s Communications Specialist said the council voted to approve the funding for the purchase. She spoke with the County Attorney and said that the city is currently in the middle of  doing its due diligence on the project.

“We’re checking the title, making sure the relevant documents are in place, and doing any studies that we need to on the property,” Hartman said.

DeWitt said that if and when the sale is finalized, the property will be added to the EDA’s monthly financial reporting.  She added that state code prohibits city governments from managing a property with tenants.

“The EDA will be asked to enter into an agreement with council to manage that [property], DeWitt said.