Blast from the Past: patriotic New Year’s reminder from Thomas Jefferson 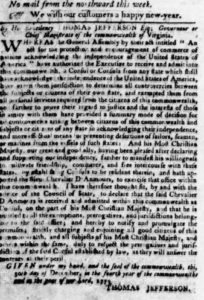 In this letter, printed on Jan. 1, 1780 in the Virginia Gazette, Virginian Governor and Chief Magistrate Thomas Jefferson reminded citizens and patriots that the utmost respect needed to be paid to foreign dignitaries. Any disrespect against a foreign dignitary could be perceived as a seditious or treasonous act.

The letter came two years after France joined the war and recognized United States independence, and just one year after Spain did the same. International support from Spain and France became important as all parties in the war converged for the Battle of Yorktown which ended in Oct. 1781.

By His Excellency THOMAS JEFFERSON Esq; Governeur or Chief Magistrate of the commonwealth of Virginia,

WHEREAS the General Assembly by their act intitled “An act for the protection and encouragement of commerce of actions acknowledging the independence of the United States of America” have authorised the Executive and admit into the commonwealth, a Consul or Consuls from any state which shall have acknowledged the independence of the United States of America, have given them jurisdiction to determine all controversies between the subjects or citizens of their own state, and exempted them from all personal services required from the citizens of this commonwealth, and farther to prove their regard to justice and the interests of those in amity with them have provided a summary mode of decision for any controversies arising between citizens of this commonwealth and subjects or citizens of any state to acknowledging their independence and more off.

Usual means for preventing desertions of sailors, seamen or marines from the vessels of such state: And his Most Christian Majesty, our great and good ally, having been pleased after declaring and supporting our independency farther to manifest his willingness to cultivate friendship, commerce, and free intercourse with these states… Consuls to be resident therein, and hath appointed the Sieur Chevalier D’Anmours, to exercise that office within this commonwealth.

I have therefore thought fit, by and with the advice of the Council of State, to declare that the said Chevalier D’Anmours is received and admitted within this commonwealth as Counsul, on the part of his Most Christian Majesty, and that he is entitled to all the exemptions, prerogatives, and jurisdictions belonging to the said office; and hereby to notify and promulgate the premises; strictly charging and enjoining all good citizens of this commonwealth, and all subjects of his Most Christian Majesty, and others within the same, duly to respect the prerogatives and jurisdiction of the said Consul established by law, as they will answer the contrary at their peril,