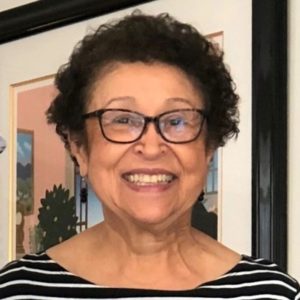 MARCO ISLAND (Fla.) — Catherine Wiggins Puryear, PhD, passed away on October 3rd at the age of 80. She died at the Williamsburg Landing, a retirement community in Williamsburg, VA. Dr. Puryear and her husband moved to Williamsburg in 1999. In 2011 they relocated to Marco Island, FL where she enjoyed reading and relaxing on the balcony of their condominium which overlooked the Gulf of Mexico. Prior to 1999, she and her husband, Alvin Puryear, PhD, lived for 35 years in New York City (NYC) where they raised their three daughters.

Dr. Puryear was born in Winton, NC on January 10, 1941 to Cola Wiggins and Elois Jones Wiggins. Her immediate family was relatively small, consisting of her parents, a brother, Christopher, and a sister, Regina. However she had a large extended family and was surrounded by grandparents, uncles, aunts, and cousins. Some of her most treasured memories were from the Jones Family Reunions which brought together the three branches of the Jones family tree.

Dr. Puryear attended C. S. Brown High School, Winton’s racially segregated high school. She was an outstanding student and leader, graduating in 1958 as the Class Valedictorian and Class President. She continued her academic pursuits at North Carolina Central University in Durham, NC where she was awarded the Volkemenia Prize for the “highest average in Scholarship, Initiative, Perseverance and General Deportment.” In 1960 she transferred to Hampton University in Hampton, VA for her Junior and Senior years. She graduated with high honors in 1962 with a degree in Sociology. She was a member of the Alpha Kappa Mu National Honor Society and the Delta Sigma Theta Sorority. Dr. Puryear went on to earn a Master’s Degree in Social Work in 1964 from the University of Pennsylvania, and a Master’s Degree in 1972 and a PhD Degree in 1977, both in Public Administration, from New York University (NYU).

In August 1962, after graduating from college, she married Alvin Puryear. While she was reaching her remarkable academic goals, she had three daughters, Pamela (1963), Susan (1971) and Karen (1975). She was a devoted mother who shuttled her girls to ice-skating practice and music lessons, cheered them on at their softball and volleyball games, and made sure that the family would be together for dinner, which she prepared nightly.

Dr. Puryear also took an active role in the education of her three daughters and was proud when they attended Yale University and obtained advanced degrees from Harvard and Stanford Universities. She was equally devoted to her two granddaughters, Mykah and Tyla. She never missed a dance recital or school grandparents’ day, and enjoyed celebrating birthdays and holidays with “the girls.” She was able to see them graduate from high school and attend Yale University and Wellesley College, filling her with pride and joy.

The almost six decade marriage of the Puryears was a true partnership devoted to family and community, and to each other. They supported one another through their academic and professional pursuits even when it meant living in different cities periodically for graduate school or spending time apart because of work travel. Even before cell phones and email, they always knew what was going on with each other and with their children because their communications and connections were so strong. They traveled extensively, experiencing the world together and creating memories with their family. From the beginning they shared values which enabled them to realize the vision they had for their lives and their family.

Dr. Puryear started her professional career as a Social Worker at St. Christopher’s School in Dobbs Ferry, NY, which served children in foster care and group homes. In 1978 she joined the faculty of the University of New Haven in West Haven, CT. A tenured professor in public administration, she taught both undergraduate and graduate courses, and conducted research on the impact of Federal Regulations on small businesses in Connecticut and firms in the New England fishing industry.

For over 20 years, beginning in 1988, she partnered with her husband to provide consulting and research services to public and private sector clients in the areas of economic analysis, market research, organizational development, and management training and development.

Dr. Puryear was also active in several community and charitable causes. In NYC she was on the Board of Directors of the Riverdale Mental Health Association; a Trustee of the Horace Mann School; on the Session at the Riverdale Presbyterian Church; and a member of the James M. Jarvie Commonwealth Service which provides care services to elderly persons in the NYC area. In Williamsburg she was a charter member of the Greater Williamsburg Women’s Association; served on the Board of Deacons at the Williamsburg Presbyterian Church; and volunteered at Faith-In-Action, an agency which provides transportation and support services for seniors. Dr. Puryear is survived by Alvin Puryear (husband); Pamela Puryear, Susan Puryear and Karen Puryear Morgan (daughters); Christopher Wiggins (brother); Mykah Puryear DeMeulenaere and Tyla Puryear DeMeulenaere (granddaughters); Kenneth Alston (brother-in-law); Barbara Banks Wiggins (sister- in-law); Jeremy Morgan (son-in-law); and Kelvin Alston and Cristi Wiggins (nephew and niece).

In lieu of flowers, donations can be sent to the fund that Dr. Puryear established, the “Catherine Puryear Fund for Alzheimer’s and Dementia Research.” Checks should be made to “The Mayo Clinic” and mailed to: Mayo Clinic—Department of Development Attn: Amanda Martin 200 First Street, SW Rochester, MN 55905 Indicate “Puryear Family” on the memo line.