Police at the College of William and Mary are currently investigating six separate incidents of politically charged graffiti found on campus during the past week — and one incident has garnered national media attention.

The final reported incident involved a statue of Thomas Jefferson, which was found with red paint on the statue’s hands.

“These incidents are all under investigation,” Suzanne Seurattan, Director of News & Media at the College of William & Mary, said in an email. “It is not clear at this time if they are connected. As we have previously said, while William & Mary is a place where we encourage civil discourse about challenging topics, it is not acceptable to deface property to express an opinion.” 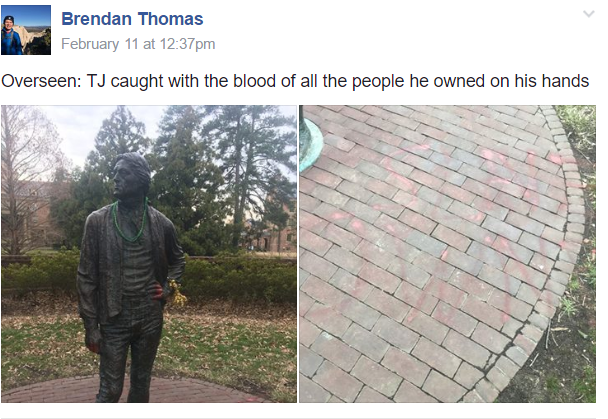 An image of the defaced statue was posted Feb. 11 on the public Facebook group Overheard at William and Mary. The post contained a photograph of the statue and the phrase “Overseen: TJ caught with the blood of all the people he owned on his hands.”

Brendan Thomas, a 20-year-old history major from Fayetteville, Arkansas, told The Associated Press he noticed the graffiti while walking to a dining hall on Saturday. He said he believed “it’s important to talk about Jefferson’s history of owning slaves, even if it’s uncomfortable.”

The photo was picked up by The Daily Caller, a conservative website, which offers its content free of charge to “any eligible news publisher that can provide a large audience.” By Valentine’s Day, the story had become national news.

Andrew Langer, a William and Mary alum and host of the radio show The Langer Cast, saw the image of the statue and visited his alma mater on Valentine’s Day with a gift of balloons for the former president.

“I am going up to the statue because I want to do something about this,” Langer said in a video he live streamed on Facebook. “Whoever did this, they were not trying to engage in debate or discourse. They may have been trying to spur debate, but what they really have done is hijacked the discourse.”

This is not the first time the statue of Jefferson, who first came to Williamsburg to attend William and Mary in March 1760, has been a source of public expression. During the past several years,  unindentified individuals placed sticky notes reading “racist” and “rapist” all over the statue. Another incident involved someone putting the school mascot’s head on the statue.

According to the Thomas Jefferson Foundation at Monticello, Jefferson’s records show he owned at least 160 slaves, and freed two enslaved men in his lifetime.

“I see nothing wrong with putting a fact, and one that is often obscured, next to a statue,” Facebook poster Brendan Thomas told WYDaily. “It’s also valuable because it inspires a serious conversation about the efficacy of lionizing our heroes, because they often come up short.”