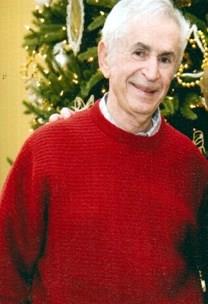 Marvin Hausman, born in New York City on January 14, 1930, died on January 9, 2016 after a prolonged battle with dementia and Parkinson’s Disease.

He was the son of Hyman and Zelda Hausman, and brother of Harold Housman. After graduating from the State University at Fredonia, New York, he spent his career in international business. In 1993, he retired to Williamsburg, Virginia with his wife of 55 years, Simone, where they spent many happy years in Kingsmill. He enjoyed playing tennis and the many cultural activities that Williamsburg offers.

In 2008, they moved to Windsor Meade, where Marvin spent his last eight years. He is survived by his wife Simone, his son Adam and his wife Yaneeke Samuels Hausman, as well as his nephew Mark Hausman and his wife Haron, his grandniece Sarah and grandnephew David.

In lieu of flowers, those wishing to remember him should make a donation in his memory to FISH of Williamsburg, 312 Waller Mill Road #800, Williamsburg, VA 23185.