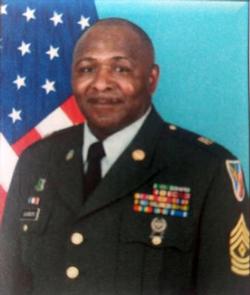 Sergeant Major Saunders was preceded in death by his parents Lloyd M. & Catherine B. Saunders, and his brothers, Bervin J. and Alton E. Saunders, Sr.

Sergeant Major Saunders is a former native of Williamsburg, Virginia. He was baptized at Mount Pleasant Baptist Church at an early age. After graduating from Lafayette High School he attended Virginia State University. Norman was united in Holy Matrimony to Joyce Jimmison Saunders in 1981. Unto this union they were blessed with three children.

Sergeant Major Saunders also worked at the Ford Company, Eastern State Hospital, Hilton Inn, and Busch Gardens, all of Williamsburg, Virginia prior to pursuing his military career. He joined the military in 1983 and faithfully served his country for 31 years to include active duty, Army National Guard and Active Duty Deployments.

A Homegoing Celebration will be held at 2 p.m. Monday, January 11, 2015, in Mt. Pleasant Baptist Church, with the Reverend Ronald A. Ellis officiating. Full Military Honors will be presented immediately following the eulogy. Mr. Saunders may be viewed from 3 to 5 p.m Sunday, January 11, 2015 in the funeral home.

Hiram A. Barber, 67, of Williamsburg

Hiram A. Barber, 67, of Williamsburg