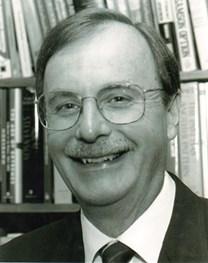 As a reflection of his spirit, he never complained during his long struggle with Parkinson’s Disease and dementia. Jim was the son of the late Alban and Irene Bill of Reedsburg, Wisconsin.

Jim is survived by his wife of 50 years, Ann Marie Bachhuber Bill, and their two children, Timothy James Bill and his wife Caroline of Harrisonburg, VA and Rebecca Bill Chavez and her husband Pablo Chavez of Washington, DC. His five grandchildren, Holland and Thomas Bill, Alexander Graham, and Oscar and Penelope Chavez will miss him terribly. He is also survived by his siblings Richard (Lynn) Bill, Betty Ann Bill, Thomas (Claudia) Bill, Alban (Sue) Bill, and Michael Bill.

Jim graduated from Assumption College in 1961. He received an M.A. from Pennsylvania State University and a Ph.D. from Princeton University. After their marriage, Jim and Ann spent two years living in Tehran, immersed fully in the culture, while Jim did research for his Ph.D.

For the next 25 years, Jim made countless trips to Iran and other Middle Eastern countries to advance our country’s understanding of the part of the world that he loved so much. In the words of former Secretary of Defense Robert Gates, “If the U.S. Government had paid more attention to what he was saying back in the 1970s, our country – and the world – could have been spared a lot of trouble then, and now.”

At the time of his passing, Jim was Professor Emeritus at the College of William and Mary in the Government Department. The College community knows him as a beloved teacher and scholar. In the foreign policy world, he is known as one of the pre-eminent experts on the Middle East, Iran in particular.

He began his career at the University of Texas at Austin where he taught for 20 years. In 1987, Jim moved to William & Mary, where he founded the Reves Center for International Studies. Over the course of his career, Jim published 10 books, the last two being the highly acclaimed The Eagle and the Lion: The Tragedy of American-Iranian Relations and George Ball: Behind the Scenes in U.S. Foreign Policy.

He was a frequent guest on national television and radio shows, including interviews with Mike Wallace, Susan Spencer, Walter Cronkite, Charlie Rose, and the McNeil/Lehrer Report. Perhaps his most cherished academic award was the Honorary Doctorate of Humane Letters in 2012 from the College of William & Mary. This is the College’s highest individual honor, first being awarded to Benjamin Franklin in 1756.

Jim’s greatest love was his family. His relationship with Ann is one of the greatest love stories of all time. They were partners in the truest sense of the word, which ultimately led Ann to assume the role of his full time caregiver, which she embraced selflessly and gracefully. He taught his children to live life to the fullest. Whether it was the Japanese Alps or the north woods of Wisconsin, caviar or cheese curds, a Cubs game at Wrigley Field or his kids’ swimming meet, he cherished all of it.

Jim was happiest on the water. Whether he was catching bass in Texas or Virginia, halibut in Alaska, musky in Canada, or northern pike and panfish in Wisconsin, fishing was his passion. He treasured his annual trips to Iron County Wisconsin, where the Bill family had a fishing cabin. The yearly excursions began in 1978 and continued until 2007.

After Tim and Rebecca started families of their own, Jim and Ann continued the annual tradition. He was quite proud of his accomplishment of five national citation bass more than 24 inches long. When not on a lake, he always made time for golf and studying the sport of baseball – especially his hapless Cubs. He could name the starting lineup of all the teams from the 1950s and 1960s. Jim passed without seeing them in a World Series, something that may not occur in his children’s lifetime.

The family would like to express deep gratitude to the staff at Spring Arbor Cottage and to Hospice Community Care for the professional and loving care they gave Jim for so many months.

A funeral Mass will be celebrated on Saturday, November 28 at 1 pm at St. Bede Roman Catholic Church, 3686 Ironbound Road, Williamsburg, VA with interment following the Mass in the St. Bede Columbarium. A reception will follow at the Great Hall on the College of William & Mary campus. Funeral arrangements were entrusted to the care of Nelsen Funeral Home in Williamsburg.

In lieu of flowers, donations can be made in Jim’s memory to The James A. Bill Study Abroad Scholarship Endowment, which can be made by check to The College of William & Mary Foundation Office of Gift Accounting, University Advancement, P.O. Box 1693, Williamsburg, VA 23187-1693. On the memo line, add: (1642) IMO James Bill. To donate online, visit http://giving.wm.edu. To designate the fund, select other and put (1642) IMO James Bill in the comment field.

Donations may also be made to the American Parkinson Disease Association.