Brandon Nice has been named the new president of David A. Nice Builders, Inc., assuming the leadership position his father held for 47 years.

Family and Faith will remain at the core of the national general contractor that specializes in retail buildouts, millwork, commercial construction, and site work and is licensed throughout the United States, Puerto Rico, and the Virgin Islands. Founder David Nice will support from the sidelines and give the responsibility to his sons, Brandon, Vice President of Construction Operations since 2009, and Christopher Nice, Director of Retail Operations and Business Development located at the company’s satellite location in Belgrade, Montana.

At this time, David’s wife, Deborah, will remain Vice President, while their daughter, Kimberly Nice Woodroffe, will continue to serve as an owner consultant supporting her brothers and her husband, Skip, who serves as the company’s’ General Superintendent.

“There is a lot of comfort in knowing the foundational support I have in my parents and my brother and sister,” Brandon said. “I am not doing this alone. It’s extremely encouraging that we’re here to support each other, and we have the support of our team. We wouldn’t be where we are without our team. They are awesome!” One of Brandon’s other biggest supporters is his wife Amy and their 3 children. “I would not be the man I am today without her by my side, encouraging, challenging and cheering me on every step of the way.”

“I will be supporting my brother in whatever way I can,” Christopher said. “We’re really close, and while we share many of the same gifts, we also have different strengths. Sometimes we take different approaches, but our unified vision grounds us all together.” Christopher Nice will eventually transition into the role of Vice President.

David Nice Builders has cultivated a national reputation thanks to its commitment to quality craftmanship delivered to customers on time. Fostering lasting relationships, as well as providing exemplary customer service, is at the cornerstone of the company’s success. David A. Nice Builders holds itself to the highest standards, whether building a small local shop, a 15,000 square-foot retail space, a complex civil project, or a large commercial building, such as a fire station.

“It is of extreme comfort to build something from scratch that you’ve invested your life and your soul into and have the privilege to pass it on to children that have the same goals, the same outlook on life and the same work ethic,” David said. “Everything you would want a son who’s taking over the business to have, Brandon has. It really allows me to just be joyful and thankful over the process.”

David Nice started the company from the dining room of the home he built in the Elmwood section of Williamsburg. He initially started out in high end residential construction before the company expanded in multiple directions. Nearly five decades later, the client list includes some of the largest national retailers in the country, Ralph Lauren, J. Crew, Barnes & Noble, SeaWorld, local municipalities, United States Government, valued developers, and many more.

Today, David A. Nice Builders is comprised of four divisions — retail, commercial, civil and millwork — they recently started development and high-end residential work on the West Coast. The staff grew from a handful to a team of 140 that works in the rural Croaker office surrounded by green space and the family horses grazing in a pasture.

When clients began requesting cabinetry with their builds, David A. Nice Builders started its own millwork plant in 1997 that has since become a sister corporation. Nicewood Enterprises, Inc., an 80,000 square-foot, state-of-the-art facility located within Stonehouse Commerce Park in Toano, offers custom millwork, fixtures, and woodwork.

Brandon doesn’t remember a time when his hand wasn’t in the family business. He dug ditches as a kid, built roofs and adopted his father’s appreciation for work ethic and integrity. “He was riding a bulldozer at 3½,” Deborah said.

Brandon earned a Bachelor of Arts with Honors in Recording Arts and Engineering through Middlesex University partnered with SAE Institute in Nashville; a program that included a year of study in Australia. He juggled a music career, touring the South and Southwest as the drummer in an Alternative-Country band, running a recording studio, all while maintaining jobs in commercial drywall/painting, commercial electrical and carpentry. “It’s always been natural and felt right to be part of this business,” Brandon said. “It’s always been fun; it’s never seemed like work.”

Like his brother, Christopher Nice followed his own path, moving to Kansas City, Missouri, after a leading from God into ministry. Upon his return four years ago, he returned to the company and is now handling operations for the retail division as well as overseeing the developmental division in Montana.

“Ever since I can remember, I was always invigorated and passionate about walking in my father’s footsteps,” Christopher said. “Moving forward, I will have a heavy role in business development, but I’ll always be tied to operations and be hands-on. We’re builders at heart. It’s how we started and how we’ll always continue. We have a strong connectivity with the people swinging the hammer, including ourselves. It’s very ingrained in us to be builders, and we never want to lose sight of that.”

“We built the company by self-performing the work with our men and women,” David said. “We were not a general contractor that subbed everything out. If you hired us as a builder, we would work with our own hands and our own crews.”

The transition for Brandon and Chris will allow them to strategically plan, team build and set goals to position the company for continued success. As David A. Nice Builders evolves, it will also continue to be transparent, offering effective and consistent communication that client’s need and value.

“For me it’s important to get to know the person outside of the project,” Brandon said. “It’s important to know what excites them and realize that sometimes they’re using their entire life investment for something we are building. I like to understand what makes them tick and be there for them outside of just being a builder, be someone they can truly count on to help them be successful.”

Brandon plans to continue the company tradition of investing in the community and has big plans with the team to make even more of an impact. “My philosophy is be good people first with integrity and honesty and the rest falls in place,” Brandon said.

Brandon acknowledged, “I have big boots to fill, but I have an incredible team around me. I’m going to rely on the strength and foundation of that good boot and carry it to the next steps. With Gods help, the name David Nice Builders, the reputation, the legacy — all will be carried forward with the highest regard possible.”

Learn more about David A. Nice Builders at davidnicebuilders.com. 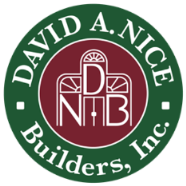