Documents obtained by a fan group of Busch Gardens Williamsburg indicate there could be another roller coaster — possibly a giga coaster — on the way in 2021.

Busch Gardens Williamsburg Fans, a group of coaster enthusiasts who, in the past, have predicted other rides based on documentary evidence, believe the leaked documents to be authentic.

A Busch Gardens spokeswoman said the park would not comment on its procedures on how to handle confidential information, including whether the park tries to find the source of the leak.

A request for confirmation on whether the documents are authentic was not immediately returned Wednesday.

The fan group has not published the documents themselves, but instead released an article with recreations of the plans.

BGWFans believes Project 2021, which obtained a 355-foot height waiver in June from the James City County Board of Supervisors, will be a roller coaster that uses the former station building for coaster Drachen Fire.

Drachen Fire was shut down in 1998 and later disassembled, according to BGWFans.

“… we’ve seen something that strikes us as legitimately extraordinary,” Zachary Strader, the group administrator, wrote in the article.

In the article, Strader wrote the document would be the best fake “the industry has ever seen,” if it turns out to be a sham.

If the ride is a coaster, it could be an “absolutely monstrous giga coaster” because of its 355-foot height waiver. The documents show trains will have four cars each in a two-by-two formation, according to the group.

Busch Gardens officials have previously said the coaster will be spirelike at the top and be about 10 feet wide at its highest point.

“Putting all of this information together, assuming this document is to be believed, it seems that we could be looking at a speed-focused, launched giga coaster of some sort debuting in Busch Gardens Williamsburg’s Festhaus Park area sometime in or around 2021,” Strader wrote.

Strader closed the article by imploring readers to remember park plans and rides can change during development. 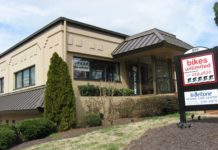 Bikes Unlimited to Close After 48 Years of Business