Celebrating a centennial family legacy in Williamsburg: 100 years  with the Wallace family 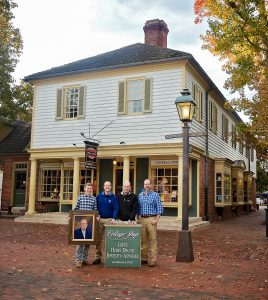 From the opening of their first store in Merchants Square, to becoming a family legacy and economic force in its community, the story behind the Wallace family’s centennial legacy in Williamsburg unfolds  like a classic American tale and an ode to our country’s pioneering and entrepreneurial spirit.

“It is the story about a man who comes up with an idea for a business and makes it work over four generations,” says Davis, a business attorney who has known the Wallace family for more than 37 years.  “And this is a small company, without outside consultants and CEOs. The Wallaces are smart, hard-working people,” he notes.

The other protagonists in this great American story are four Wallace generations of entrepreneurs fueled by a deep sense of commitment to family and to investing in and serving the community.  Ultimately, the Wallace experience is more than simply one family’s legacy because their story is inextricably intertwined and linked to Williamsburg’s history and economic landscape.

Their story officially commenced in 1919 when Robert P. Wallace founded a college retail store, The College Shop, downtown in Merchants Square.  Since opening The College Shop, the Wallace family has operated 30 to 40 businesses in Williamsburg and provided thousands of jobs to local residents and college students.

Today, the original store, The College Shop, still exists but with a new name – R.P. Wallace & Sons General Store – and reaches a historic milestone with its 100th anniversary this month.  A cake-cutting ceremony will take place at the store on Sunday May 19th at 4:30 p.m.  to commemorate the store’s 100th anniversary and honor past and current staff.

This celebration also commemorates a century of the Wallace family’s colossal economic and business contributions to Williamsburg as well their steadfast dedication to the economic vitality of the town.

The seeds for the Wallace family legacy were likely planted when the family patriarch and World War One Veteran, Robert P. Wallace, came to Williamsburg to play football for the College of William & Mary.

After serving three years in World War I and a year prior to graduating, Wallace founded The College Shop in a corner building in the historic Merchants Square, which is considered one of the first planned shopping districts in the United States.

“When it first started, it really was the College Shop – it was exactly what you think it would be as a college shop.  Since there was not a college bookstore, we sold all the supplies, all the books, everything for the students and it has just morphed over the years,” Wallace Jr. explains about the store’s origins.

Rebranding and Branching Out

However, the store’s shifting customer base and needs prompted the landmark store to transform and rebrand.  “As Williamsburg grew and became a tourist destination, we started catering more to people visiting Williamsburg and more to resort guests,” Wallace Jr. explained.

The transformation sparked a name change for the store as well.

“It was originally called the College Shop and had that name for 88 years until we found that we needed to rebrand the store to R.P. Wallace & Sons General Store.  The store has really changed over the years,” he says.

Now, the General Store and their other retail businesses cater to locals, tourists and college students and offer customers a unique mix of products and goods.

In addition to rebranding its first store, the Wallace brothers expanded the family business and chose to invest and build a variety of new Williamsburg businesses rather than open stores up along the resort coasts.

The Wallace family businesses encompass R.P. Wallace & Sons General Store, The Campus Shop which sells College of William and Mary swag, and The Christmas Shop, which are also in Merchants Square along with Wallace’s Trading Post, Bubba’s Ice Cream Shack and The Williamsburg General Store, located on Richmond Road.

“Honesty, integrity and consistency for a long period of time,” replies Sam Wallace Jr. when asked what he wants most  remembered about his family. “I try to be honest and fair with everyone in all aspects of the business. That is what my dad instilled in me,” said Wallace III, who runs The Williamsburg General Store and Wallace’s Trading Post, in a recent radio interview.  “Good customer service is important to us. My dad also taught me to treat your customers and your employees the way you want to be treated. Always.”

“Local people doing real good local business for decades,” says businessman, Joe Harrow, describing the Wallace family.  Harrow, President of the Middle Peninsula Insurance Agency, who has 30 years banking and insurance experience in the town, has known the Wallace family for 35 years.  “They run good operations and are really good people who have been giving back to the community for generations,” Harrow adds.

Wallace Jr. hopes the legacy of his family’s economic contributions to the community will continue to be remembered as well.  “We have provided thousands of jobs over the years – part-time jobs, full-time jobs, first jobs, jobs to get students through college,” he explains. And the family’s creation of jobs in the community is a sentiment echoed among the business leaders in the community.

Though modest and humble and not one to “toot his own horn,” Wallace Jr., who has been in the family business the past 33 years, is proud of how well he, his brother Cabell and his oldest son Sam Wallace III work together in managing the family businesses. When conflict arises, he says they resolve conflict easily due to their common goals and “respect, unconditional trust and love for each other which transcends business.”

He laughs as he recalls that this was not the case two generations earlier in the working relationship between his father and his uncle.  That may be another story, for another time.

A Maker-Merchant space comes to The Historic Triangle as an answer to the high cost of retail space.

A Maker-Merchant space comes to The Historic Triangle as an answer to the high cost of retail space.