HAMPTON — Imagine being transported back in time to 20 million years ago, but without a time machine and with never leaving Hampton Roads. For Peninsula-area children, they were able to do just that at Rice’s Fossil Pit.

In the early 1940s, William Rice and his wife, Madeleine, relocated to Hampton from Lynchburg. Mr. Rice worked briefly as a welder at Newport News Shipyard and purchased 12.5 acres of land in Hampton.

In 1943, the Rices built an a-frame bungalow on the site, which primarily consisted of wooded marshland.

Five years later, Mr. Rice left his job with the shipyard in order to dig and haul for large scale construction projects around the greater Hampton Roads area. He began operating a borrow pit on his personal land that same year.

A Whale of a Tale

While digging in the pit at a depth of approximately 18 feet, there happened upon an enormous skull. The intact fossil was approximately 60 feet long; roughly twice the size of the largest known whale species to that point.

At first, Mr. Rice did not think much of it. Being from Lynchburg, he thought finding shells and fossils were a usual thing. After all, it was known that during the Miocene Epoch (approximately 5.3-23 million years ago), the Hampton Roads region was largely underwater. Scientists believe that the shoreline stretched up to the fall line between Richmond and Roanoke.

Digging further, Mr. Rice found a giant rib bone. At that point, he knew he had something that needed professional attention.

His first call was to the Mariners’ Museum and Park in Newport News. Not quite sure what to do, the museum, in turn, called Smithsonian Institute geologist, Frank C. Whitmore, Jr.

Whitmore sent a team to the Rice property, who spent several weeks examining the fossils and uncovering what they could. At that point, the fossils were packed up and sent to the Smithsonian for further study.

Upon further examination, Whitmore and his team determined that not only was this an incredibly persevered whale fossil, but of a Miocene Epoch-era species that had never been discovered before.

Because of the copious amounts of shells that were found in the various layers of earth on the Rice’s property, Mr. and Mrs. Rice helped their friends, Mr. and Mrs. William Kibler, open a shell shop in Virginia Beach.

After the incredible discovery, students from Old Dominion University came to dig, which started with fifteen students but eventually led to around three hundred each year.

The pit remained closed to the public, though there was much fascination with it. The Rice’s son, Kenneth (Kenny), loved digging alongside the students, curating his own collection of fossils found.

On July 11, 1964, Kenny was digging in the pit as per usual. At approximately 8:45 a.m., a tractor tilted on an incline, falling on the boy and crushing him. He died 40 mins. later from internal hemorrhaging and a crushed chest. Kenny was only 14 years old.

Mrs. Rice later told journalist Robert Wolf, “When we pulled ourselves together following Kenneth’s death, we resolved to establish a memorial museum where his fossils could be displayed at the place he roamed so happily in those early years.”

To establish the museum, the family acquired the former home of Mr. and Mrs. Edwin Berry. It was 26 square feet and brick. The Kiblers came to help their friends as well as the congregants of Fox Hill Baptist Church. The front entrance to the Berrys’ old home was switched out for double framed doors, which were repurposed from the defunct Langley Theater, which was once located on Queen Street in Hampton.

The finished building had knotty pine paneling, glass cases, and one special corner that displayed Kenny’s collection, including a geode that was a particular source of fascination for the young teen. It was cracked in half and lined with brilliant crystals.

Museum and an Adventure

On March 8, 1967, the Kenneth E. Rice Memorial Museum was opened at the family’s property, located at 29 Harris Creek Rd. in Hampton. The first museum visitors came three days later and were a group of eighteen students from the College of William & Mary.

There was a small admission fee charged in order to see what was considered the largest collection at the time of Miocene-era fossils.

After turning off Fox Hill Road, guests were instantly transported back in time. After walking a short distance through the trees, the pit seemed to come out of nowhere. There Rices’ daughter-in-law, Jan Rice, later said, “To me, it was always like walking back through time into the prehistoric era… When you looked around, it was almost unbelievable. It was like being in a different world.”

In addition to the museum, guests were also invited to bring their own digging tools and buckets to find their own prehistoric discoveries. To kids around the Peninsula, this place became known, not for its formal name, but as “Rice’s Fossil Pit.”

In 1969, the scientists from the Smithsonian Institute returned to the Rice property after yet another skeleton was found. Like before, it was packed up in a crate, ready to ship back up to Washington D.C. En route back, the team didn’t get so far as the George P. Coleman Bridge (connecting Yorktown to Gloucester via Route 17), when they received word that an additional fossil had been found. This time, a 25 million-year-old star coral, Septastrea marylandica, that weighed in at approximately 500 lbs.

Upon further study of the star coral, it was one that was known to have grown at depths of approximately 130 feet in tropical climates. This gave scientists and historians a further understanding of what Hampton Roads was like during this time period.

Throughout its lifespan, fossils from over 250 species were discovered at Rice’s Fossil Pit, including the shell from an X-4, or otherwise known as: Ecphora Quadricostata; a now-extinct species of snail.

A Treasured Place for Treasures

Between 1967 and 1970, approximately 15,000 visitors came to Rice’s Fossil Pit. The collection that once inspired Kenny Rice was now living in legacy to inspire the park’s guests.

Rice’s Fossil Pit became not only a tourism destination, but also a place of educational intrigue for the many students who took field trips to dig in the pit and learn from the collection in the museum. One year, the school system in Charlottesville sent as many as fifteen charter buses down.

Rice’s Fossil Pit would go on to boast picnic grounds, a snack bar, gift shop, and, of course, the treasured museum named in memory of the Rices’ son. With a pit the size it was but with limited drainage, it became necessary to make sure that water stayed out of it. The Rices installed an electric pump so, regardless of the weather shifts and tropical storms that came through, the pit could continue to be enjoyed.

The End of an Era

On November 23, 1979, tragedy struck the family again when William Rice died of a heart attack at 59 years old.

Mrs. Rice continued to run the museum and park until failing health forced her to close in 1992. The family offered the land to Hampton, but it was ultimately decided that the city would pass. The park was then permanently shuttered to the public.

Madeleine Rice died on April 15, 2000, leaving behind a legacy of a landmark, built in the loving memory of her son.

For those who never experienced this journey into the prehistoric pass, Rice’s Fossil Pit may disappear in the periphery on history’s highway in just the blink of an eye.

In 2007, the Rice family sold the grounds to nearby Gloria Dei Lutheran Church. The pit that started as a borrow and transformed into a place with a wealth of fossils and a catalyst for the imagination was filled with water in order to attract some of the local wildlife. It is virtually unrecognizable and is inaccessible to public as it is private property.

However, while gone, not all is lost. The whale discovered at the pit in 1960 remains in the Smithsonian Institute’s collection. In 2002, Smithsonian geologist Frank C. Whitmore, Jr., who sent the team to Hampton forty-two years prior, authored a paper, officially hailing William Rice’s whale a new species. With that, the previously unknown member of the balaena genus was given the name, Balaena Ricei.

Otherwise, Rice’s Fossil Pit remains a vibrant memory for local adults who remember taking a field trip to spend the day digging in dirt, finding ancient fossils, and inspired to learn more about a far-off time millions of years ago.

Landmark Lost: Nick’s Seafood Pavilion and the Legacy of the Mathews 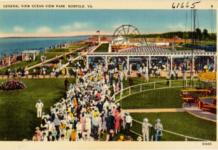 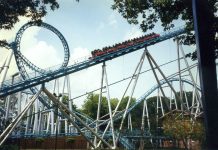 Catch Up on Landmark Lost