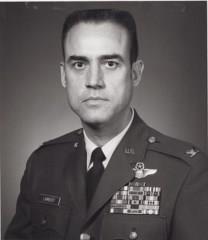 After enlistment in 1956, he was commissioned through the Aviation Cadet program and rose to the rank of full colonel, serving first as a navigator in C-54s, C-124s and C-133s. After pilot training he flew T-29s in support of navigator training. His 28-year career took him to Texas, Oklahoma, Delaware and California before a tour at Supreme Headquarters, Allied Powers Europe (SHAPE) in Belgium and a follow-on assignment as Base Commander at Moron Air Base, Spain, where he was awarded the Spanish Air Medal First Class.

He and his family returned to the U.S. in 1976 to serve in the Washington D.C. area at the Pentagon in Foreign Military Sales, and at nearby Bolling and Andrews Air Force Bases, supporting Military Airlift Command VIP and Air Force One missions at the 89th Military Airlift Wing and global airlift as Deputy Commander for Resources at the 76th Airlift Division.

After his retirement in 1984, Luke was employed as a bar manager at the well-known Trellis and Fat Canary restaurants in Colonial Williamsburg.

In addition to his family, Luke led, cherished and inspired innumerable neighbors, friends and professional associates starting from his record-setting high school sports days, playing football, basketball and baseball, throughout his long and worldwide Air Force career, to extensive time working in Williamsburg, while always remembering his beloved hometown family, neighbors and schoolmates from Franklin and Pendleton County.

He regularly reunited with the C-124 “Old Shaky” group at their annual meetings in Dover, Delaware. A performance report reads: “This officer has been more successful in his association with people than any officer I have known.”

The funeral will be held at 11 a.m. Thursday, 14 January 2016, followed by visitation from 11:30 a.m. to 1:30 p.m. at Nelsen Funeral Home, 3785 Strawberry Plains Road, Williamsburg, with interment at Arlington National Cemetery in a private ceremony at a future date.