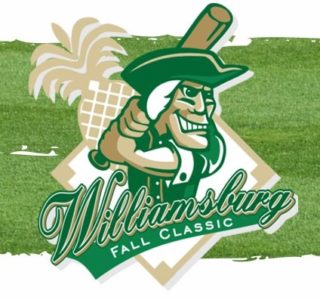 The tournament will be held Saturday and Sunday at the Warhill Sports Complex and Warhill High School.

The tournament will act as a fundraiser for the club baseball team, which receives limited funding from the William & Mary Student Recreation Center.

Initial estimates for the cost of the Williamsburg Fall Classic by William & Mary Club Baseball Team Business Manager Sam Holliday came out to roughly $3,500. The cost of the tournament is separate from the costs needed to fund the team’s fall regular season.

Holliday said the Alliance helped the team secure a $1,000 grant from Sports Williamsburg. In addition to the grant, the team has also received sponsorship offers from two local businesses — Channello’s Pizza and Sno-To-Go.

Holliday said the team is still “on the warpath” with regards to reaching its fundraising goal.

Interested businesses can sponsor the Williamsburg Fall Invitational for as little as $100 and up to $1,500. The team is also accepting individual donations to help fund the tournament. Anyone interested in donating can email Holliday at Seholliday@email.wm.edu.

Hosting a tournament was also a matter of convenience for the team, which has to travel to Greenville, South Carolina — a nearly six-hour trip — for the closest club baseball tournament in the fall.

For cash-strapped college students, getting to play multiple games 10 minutes down the road in front of family and friends is an opportunity too good to pass up.

Moreover, the Williamsburg Fall Classic will be the first time William & Mary’s club baseball team will get to step on the field this season. It’s an opportunity members of the team are especially excited about.

“Starting the season anyway is exciting. Hosting a tournament for the first time is an exciting feeling as well,” William & Mary Club Baseball Coach Hunter McKinney said. “It should be an exciting weekend for us all.”

“It would be even better if we won the tournament,” junior shortstop Kyle Wilson was quick to add.

And while there is plenty of excitement among members of the team about hosting the tournament, there is also some uncertainty as to how well the tournament will be attended by spectators.

Holliday is hoping the allure of high-quality, October baseball will be enough to bring locals out to the ballpark to support their local team. The tournament is free of charge and open to the public.

Tribe Scribe: Pitt pulls away in second half to defeat Tribe 80-64

Tribe Scribe: Pitt pulls away in second half to defeat Tribe 80-64