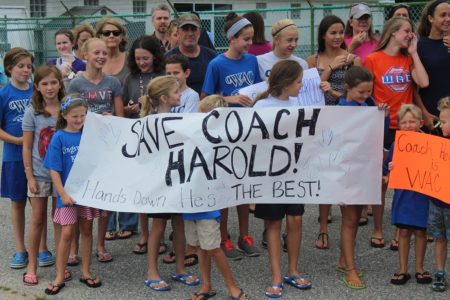 After receiving an outpouring of support from former WAC swimmers coached by Harold Baker, Kasey Pittman and Bobby Jacobsen have started a GoFundMe campaign to raise money for any potential legal funds Baker might incur if he is not reinstated by the club after the special meeting between the Board of Directors and the membership.

Pittman, a WAC alumnus who coached the team from 2002 to 2005, said Baker has retained an attorney in Richmond but has not requested any help paying for anything.

“There were plenty of alumni who wanted to help,” Pittman said. “We as a group think there has been a huge disservice to the club, Harold, his legacy, the overall swimming community — so we’re trying to help him fight it. Anything that is left over will go to the club as soon as he is reinstated. If he has to start a new club, it would go to that club.”

WAC Board Schedules Meeting Amid Pressure from Members

With a goal of $10,000 set, the fundraiser received more than $2,300 donated in less than a day through word-of-mouth, Pittman said.

Outside of posting it to her personal Facebook page and the WAC Concerned Parents and Alumni Facebook page, the GoFundMe was not heavily publicized. Pittman plans to launch a personal email campaign and increase social media promotion to help raise money for the cause.

Money raised in the GoFundMe campaign will not be used to pay for costs Podolin incurs.

The Board of Directors failed to respond to Podolin’s requests and, in turn, Podolin responded with her lawsuit Aug. 14.

Within the lawsuit, Podolin cites the Virginia Nonstock Corporation Act that requires a corporation to allow a member to “inspect and copy any other record” within a reasonable amount of time.

If the corporation does not comply, the member may appeal to the circuit court and request an order to permit inspection and copying of the requested records.

In the lawsuit, Podolin argues that disclosure of the records by the Board of Directors is critical for preparing for the special meeting, which is scheduled for Aug. 30 according to an email – not considered an official notice – sent to members last week.

“The Executive Board’s failure to produce the requested records on behalf of WAC occurs at a time when the board has acted in a dilatory and self-serving fashion; that said conduct has caused, and continues to threaten, irreparable harm to WAC,” the suit said.

On the evening of Aug. 14, following the filing of the lawsuit, Podolin said she began receiving documents from the Board of Directors and has since suspended the lawsuit.

The fate of the lawsuit currently rests on the Board of Directors providing a list of members eligible to vote during the special meeting, which has not yet been provided to Podolin.

Rebecca Cristol, the president of the WAC Board of Directors, confirmed to WYDaily no formal notice has yet been given to WAC membership.