WAC Board Schedules Meeting Amid Pressure from Members 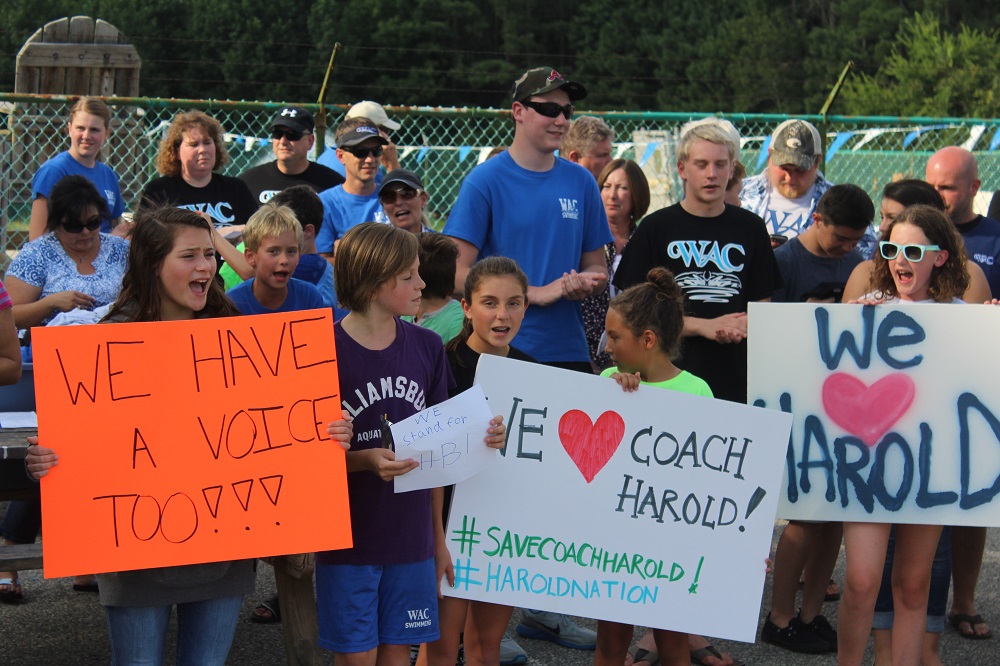 After weeks of demanding a meeting, Williamsburg Aquatic Club members unhappy with the Board of Directors’ decision to fire founder and head coach Harold Baker now have a date to cast their vote of no-confidence.

The three remaining members of the board – two have left this summer because of their disagreement with the board’s decision – set a full membership meeting for 1 to 5:45 p.m. Aug. 30 in the James City County Recreation Center.

Those who support Baker have said they intend to issue a vote of no confidence at this meeting, which would start the process of dissolving the Board of Directors.

The board scheduled the meeting in a letter to members Aug. 12, nearly two weeks after the July 31 meeting between members and the board in which the pro-Baker members formally requested a special meeting.

While the board could have decided on a date at any point since receiving the letter, WAC bylaws dictate the date itself could not be sooner than 10 days after the date of the formal request. The board had until Aug. 29 to decide on a meeting date, which could not be scheduled past Oct. 28.

Board members attempted to schedule a mediation meeting with a few of the vocal pro-Baker members who belong to the Williamsburg Aquatic Club Concerned Parents and Alumni Facebook group, but the request was denied.

Sarah Podolin, a WAC parent who has been vocal in her support of Baker and active in organizing like-minded members, previously said she refused the mediation meetings because she had been put off by the board’s decision to advertise the head coach position and did not want to any members to be left out of the discussion.

The board addressed the pro-Baker members’ refusal to engage in mediation in its Aug. 12 letter that also scheduled the meeting.

“It seems that the ‘concerned parents group’ and the new board they are putting forward for election has only one agenda: to reinstate Harold and return to the way things were,” the letter said.

The letter reiterated the board’s concerns about WAC’s procedures and Baker’s leadership, but lamented the pro-Baker camp’s lack of interest in addressing the “serious problems” the board presented to members in the July 31 meeting.

WAC Board, Members Meet for First Time Since Baker Firing

In a post to the Concerned Parents and Alumni Facebook page, Podolin took issue with the board’s perception that members who want to reinstate Baker have no interest in solving those problems.

“I think to state that concerned parents and potential new interim board members don’t have interest in the problems of the club or to insinuate that anyone would proceed without identifying where change needs to take place is an odd interpretation to put on anything that’s been posted by any member of these groups,” Podolin wrote, adding she hoped the WAC members vote to form a few committees to address the concerns. “Our goal has been only to have these issues put to the full membership.”

Podolin also released the agenda for the meeting, which includes a discussion of Baker’s termination; a vote of no confidence in the current board; a vote on the removal of Rebecca Reimers-Cristol, Ted Lynch and Luis Long as members of the Board of Directors; and a vote to elect five new members to the board.