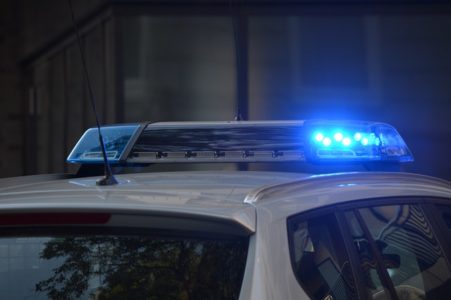 NEWPORT NEWS — On Tuesday, May 11, Newport News Police Department (NNPD) Chief Steve Drew held a press conference to provide more information regarding the May 10 death of an infant and malicious wounding of his sibling.

On Monday evening, John Howard was not at home when he received a text message from his fiancé, Sarah Whitney Ganoe, describing the scene at the apartment that they shared. This prompted Howard to call 911 while he was rushing to get to the scene. Living at the apartment was also Ganoe’s 8-year-old daughter from a previous relationship, and the couple’s 10-month-old son, Zell. The identity of the 8-year-old daughter is being withheld at this time.

Officers made immediate entry in what Chief Drew described as a “horrific scene” to find Ganoe’s daughter and the infant, Zell, in a bedroom, suffering from multiple stab wounds all over their bodies. Officers and first responders did all they could to provide first aid to the children, talk to to them and try to calm them. Despite their best efforts, Zell died at the scene.

Ganoe’s daughter was taken to a local hospital before being flown to Children’s Hospital of the King’s Daughters (CHKD) where she is currently listed in critical but stable condition. Her father, who lives out of state, has been notified.

Chief Drew made contact with Newport News Commonwealth’s Attorney Howard E. Glynn before arriving to the scene at approximately 10 p.m. Conversations between Glynn and Drew continued throughout the night.

RELATED STORY: Mother charged with death of infant, malicious wounding of other child

Howard was reported to have had family members accompanying him at the scene. Drew said that they are being interviewed.

Police believe that the children were injured using a 2-2 1/2 inch pocketknife.

Ganoe was taken into custody at the scene and treated for superficial wounds before being taken in. She has been questioned and is currently being held at the Newport News Detention Center.

NNPD interviewed neighbors but none of them reported hearing any commotion in the apartment.

Chief Drew said that the department is not looking for any other suspects in this case. He also added that police had been called to Howard and Ganoe’s residence in the past for domestic or disorderly reports.

NNPD has identified 10-12 officers who worked the scene to receive psychological supported and is also offering psychological assistance for first responders who directly aided in this case.

Chief Drew said that he plans to walk the neighborhood over the next 24 hours, not necessarily to investigate, but to make sure that the residents “are okay.” He also plans to go to CHKD to visit with the 8-year-old girl. Her school has been notified of these events.

No other information will be released at this time. “Zell and his sister deserve the integrity of this case,” said Drew.

WYDaily will continue to bring you more information as this story develops.