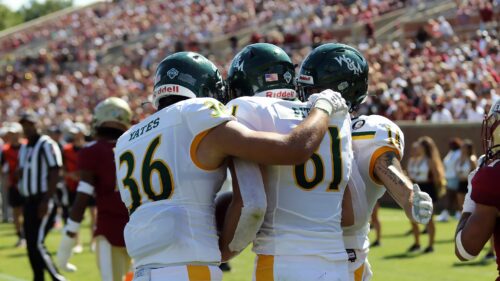 ELON, N.C. — William & Mary was so close to an early knockout punch Saturday afternoon in its Colonial Athletic Association opener. Instead, the Tribe had to hold on to clinch its best four-game start since 2014.

After taking a three-touchdown lead less than a minute into the third quarter, W&M needed all its grit for a 34-31 win over Elon at Rhodes Stadium. Quarterback Darius Wilson had 293 total yards and three touchdowns, and tight end Lachlan Pitts had a career day with four catches for 70 yards and two scores.

The Tribe (3-1, 1-0 CAA) scored 87 seconds into the game and led the rest of the way. That 21-point margin dwindled to a field goal twice in the fourth quarter, but each time W&M’s offense answered — first with a touchdown, then with a third-down conversion to all but seal it.

“Very happy for the offense to be productive,” W&M coach Mike London said. “We got slowed a couple of times, but as we’ve always said, it’s hard to win football games on the road. Just watching these guys gut it up, especially the fourth quarter, was really special to see.

“We had a never-quit attitude. This team wants to be known as tough and resilient. It was hot out there — you saw everyone cramping up — but the level of toughness showed up. Somebody had to step up and make a play, and at any moment, anyone who was on the field rose to the occasion.”

The most creative call of the day was a 29-yard touchdown pass from DreSean Kendrick, a backup running back, to Cole Blackman for W&M’s final touchdown.

Wilson completed 14-of-20 passes for 198 yards with two touchdowns and two interceptions. He also rushed for 95 yards, 46 coming on a first-quarter touchdown.

The unexpected star of the day was Pitts, a senior who before Saturday had one catch for 17 yards in his career. Targeted four times, he had four receptions for 70 yards and two touchdowns, including one the Tribe desperately needed to start the third quarter.

“I had a good reception last week against Colgate, so we figured we could utilize me a little bit more,” Pitts said. “Maybe not as much as this, but it was a great day and we were calling some good plays out there.

“I like to think I have some good hands, and I was confident. I’ve played for a long time here, and I’m confident in my abilities. I’m just happy we were able to come down here and get a good team win today.”

The game started better than anyone in green and gold could have realistically expected. On the first play from scrimmage, cornerback Tye Freeland stripped the ball from wide receiver Kortez Weeks and recovered. His return set up a first-and-goal from the 1-yard line.

On third down, Donavyn Lester’s 2-yard run gave the Tribe a 7-0 lead less than a minute and a half into the game.

The Phoenix scored two touchdowns before halftime and could have edged closer had Skyler Davis not missed a 36-yard field goal on the final play of the first half.

Then came the Kendrick to Blackman touchdown pass, which only briefly stalled the Phoenix. Quarterback Davis Cheek (36-of-54, 384 yards) threw his third touchdown pass to cut the deficit to a field goal with 4:38 remaining.

With all the big plays W&M’s offense had Saturday, one of its most important was a 5-yard screen from Wilson to Lester. It came on third-and-4, and it moved the chains with 2:18 remaining.

Elon had one timeout left, so by the time William & Mary punted, only 25 seconds remained on the clock. Will Whitehurst’s 45-yarder pinned the Phoenix at its 8, and not even Cheek could pull that off.

It was the second time in six months these teams had played. On March 20, in the abbreviated spring season, William & Mary won 31-10 at Zable Stadium behind true freshman Malachi Imoh’s 137 yards and three touchdowns.

In 2019, the Tribe defeated the Phoenix here 31-29 in five overtimes. It was the second-longest game in terms of extra sessions in Championship Subdivision history.

With Saturday’s win, William & Mary is 3-1 for the first time since 2014, when it won four of its first five games. It had been since ’15 when the Tribe last won its CAA opener.

“Going three in a row and starting off 3-1, going into the bye week with that kind of momentum, it’s perfect,” Pitts said. “But we have to be 1-0 every single week.”