Habitat For Humanity To Raise Funds For 3D Printed House 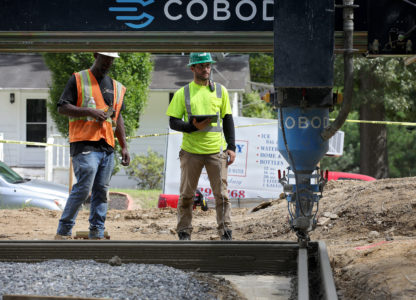 WILLIAMSBURG — The Habitat For Humanity Penninsula and Greater Williamsburg will host their 17th annual charity golf tournament at the James River Country Club on Monday, Sept. 20, 2021.

The non-profit organization announced that all of this year’s proceeds will benefit its first-ever 3D printed house on the east coast. This milestone project is a joint effort between Habitat For Humanity and their partnership with Alquist.

RELATED STORY: A 3D-Printed Home is Coming to Williamsburg

Alquist is a 3D printing construction company that focuses on bringing affordable and sustainable housing to low-income and rural communities. The company has invested over 4 years of research in 3D printing technology capable of constructing single-family and multifamily homes.

One of the key components to the whole construction process is the 3D printing technology used. Alquist and Habitat for Humanity will be utilizing a COBOD 3D printer. COBOD (Construction Of Buildings On Demand) is a company based in Europe that manufactures 3D construction printers large enough to develop full-scale buildings. COBOD has already printed a building of its own, and its new 3D printer, the BOD2, is capable of printing three-story buildings.

The partnership between Alquist and Habitat for Humanity is a symbolic step forward for both organizations in their efforts to address the lack of affordable homes in the United States. Alquist uses concrete to 3D print its homes. The process is estimated to save up to 15 percent per square foot in building costs. Concrete will potentially benefit the resident’s long-term savings because the material is known to retain temperature more efficiently. This means that the resident of the 3D printed home will potentially save on heating and cooling costs as time goes on.

The 3D printed home, that the charity golf tournament is benefiting, will be approximately 1,200-square-feet, with three bedrooms and two full bathrooms. Habitat for Humanity Peninsula and Greater Williamsburg will ensure that this house is EarthCraft certified.

Once the project is completed, the 3D printed home will be sold to April Stringfield and her family of two. Springfield has been able to use Habitat for Humanity’s homebuyer program to ensure that her monthly mortgage payments are no more than 30 percent of her income, including her real estate taxes and homeowner’s insurance.

“Our goal is to raise $30,000 from the community one donation at a time,” said CEO of Habitat For Humanity Peninsula And Greater Williamsburg Janet V. Green. “To have fun with this project crowdfunding project, in the spirit of the 3d technology, we’ve set up a donation portal online to give in increments that include threes-$33.33, $83.33, which is the cost to construct one square foot of the home, and $333.33. Of course, any and all donations are welcome and we love to be surprised.”

The non-profit has already raised over $6,200 from the community.

The annual charity golf tournament will feature a hole-in-one competition and raffle drawings. The registration for the tournament begins at 8 a.m. and the shotgun start will follow at 9 a.m.

Habitat for Humanity has set up a web page for those who are interested in getting more involved with the tournament.