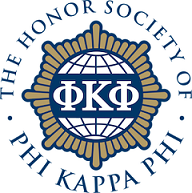 BATON ROUGE, La. — On Tuesday, April 27, it was announced that four local residents were inducted into the Phi Kappa Phi honor society.

The four students are listed among approximately 30,000 students, faculty, professional staff and alumni to be inducted into Phi Kappa Phi each year.

Membership to the honor society is by invitation only and requires approval by one of the society’s chapters. Phi Kappa Phi notes that only the top 10 percent of college seniors and 7.5 percent of juniors are eligible for membership. Graduate students that are in the top 10 percent may also qualify, along with faculty, professional staff and alumni who have achieved scholarly distinction.

Phi Kappa Phi was founded in 1897 with the purpose of recognizing students who achieved academic excellence in all disciplines. Today, it boasts chapters on more than 325 campuses across the United States and the Philippines. Since its founding, more than 1.5 million members have been inducted into the honor society, including President Jimmy Carter, NASA astronaut Wendy Lawrence, and novelist John Grisham.

WYDaily wishes to congratulate Gayoung, KeeAnia, Jenna and Rebecca on this fantastic achievement.