A project to improve capacity and safety at the intersection of Centerville Road (Route 614) and News Road (Route 613) in James City County is scheduled to begin as early as Jan. 6, Virginia Department of Transportation officials said Wednesday.

In this early phase of work, crews will also be installing a temporary storm water sediment basin and supporting drainage structures on Centerville Road as an environmental measure to control and filter any residual runoff from the project.

Henry S. Branscome, LLC was awarded the $1.9 million construction contract on Nov. 15, 2019. The project is estimated to be complete in winter 2020, officials said.

Starting as early as the week of Jan. 6, right shoulder closures are estimated to begin on Centerville Road to allow for the installation of temporary construction signage. 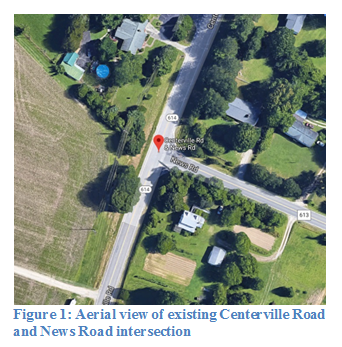 VDOT and the contractor will work to minimize impacts and mitigate traffic issues as much as possible throughout the project duration, maintaining two-way traffic on both Centerville Road and News Road during construction. Throughout all phases of construction, access will be maintained to all local residences.

Motorists will be advised of additional lane closures or traffic shifts that may occur during the project. All construction work is dependent upon weather conditions, officials said.

To learn more about the Centerville Road at News Road Intersection Improvements project or sign up for project updates, click here.

John Mangalonzohttp://wydaily.com
John Mangalonzo (john@localdailymedia.com) is the managing editor of Local Voice Media’s Virginia papers – WYDaily (Williamsburg), Southside Daily (Virginia Beach) and HNNDaily (Hampton-Newport News). Before coming to Local Voice, John was the senior content editor of The Bellingham Herald, a McClatchy newspaper in Washington state. Previously, he served as city editor/content strategist for USA Today Network newsrooms in St. George and Cedar City, Utah. John started his professional journalism career shortly after graduating from Lyceum of The Philippines University in 1990. As a rookie reporter for a national newspaper in Manila that year, John was assigned to cover four of the most dangerous cities in Metro Manila. Later that year, John was transferred to cover the Philippine National Police and Armed Forces of the Philippines. He spent the latter part of 1990 to early 1992 embedded with troopers in the southern Philippines as they fought with communist rebels and Muslim extremists. His U.S. journalism career includes reporting and editing stints for newspapers and other media outlets in New York City, California, Texas, Iowa, Utah, Colorado and Washington state.