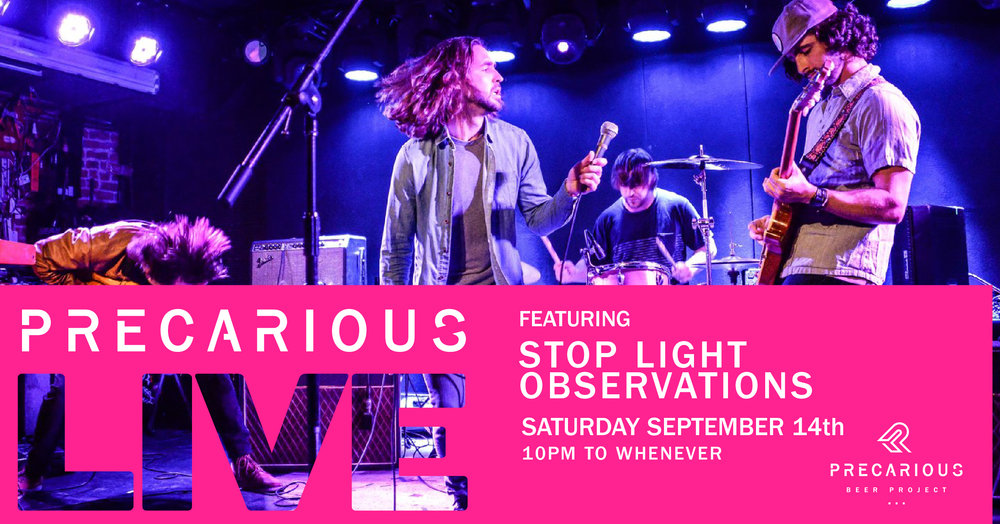 Precarious LIVE welcomes Stop Light Observations on Saturday, September 14th. Precarious LIVE is the newest concert series, featuring some of our region’s best local artists and musicians! Come jam out with us in the new Precarious Beer Hall!

Must be 21+ after 9 p.m. and ID’s will be checked at the door. No outside food or beverage is allowed.

Come hang out, have fun, and be safe!

John Keith Culbreth (aka Cubby) was 16 years old—no longer the religious child he had been back in his childhood days spent in Anderson, SC—but was, unknowingly, poised for a divine intervention of life-altering proportions. While peacefully sleeping after a classmate’s musical performance, an entity presented itself to Cubby—the entity presented itself as God. “It was the most vivid dream I had ever had,” says Cubby. “It felt so bizarre.” “God” spoke to Cubby. It told him to contact his classmate, Will Blackburn, and come together to create music. Cubby obliged, Blackburn agreed, and the band proceeded to practice for over a year, never playing a show.

Stop Light Observations’ inaugural performance took place on Sullivan’s Island. Among the crowd was Cubby’s childhood pastor—a man with whom he had once had a close relationship. As it turns out, Cubby’s former pastor was Will Blackburn’s grandfather. Divinity had served up fate. Cubby and Blackburn had been childhood friends, but never knew it. SLO was born, and the sky was the limit.

But things didn’t truly take off until a few years later when SLO released their acclaimed 2013 debut, Radiation. Metronome hailed the record’s “emotive and elegant” songs, which landed perfectly in the sweet spot between arena and indie rock. The band went from relative unknowns to playing Bonnaroo and selling out Charleston’s largest club, The Music Farm, in just a year.

Since then, Stop Light Observations have broken the record for most consecutive sold-out shows at The Music Farm and have toured across the country, playing standout festival sets at Firefly, Summerfest, and more. SLO’s most recent LP, Toogoodoo, saw coverage at major national outlets from PBS and Conan O’Brien’s Fresh Noise to Impose, PopMatters and Garden & Gun, the latter praising Toogoodoo as “a promising debut from the band, who have wowed audiences throughout the South.”

Now, following the successful release of Toogoodoo, and an ambitious year on the road in support, Stop Light Observations are poised to tackle their next major endeavor—an ongoing series of digital 45s, each with an A-side and B-side, entitled The Volume, which will disperse the band’s hard-hitting yet melodic songs in a more immediate fashion.

“The Volume is much more than just bypassing the mechanics of an album,” Cubby explains. “Its about inspiring ourselves and others with this approach that lends itself to complete creative freedom. The Beatles released 250-plus songs in 7 years without the technology we have today. If they can do it, why can’t we?”

At the center of the first volume is Stop Light Observations’ new single, “Coyote.” It’s a stunning, slow-building piano ballad that evolves strikingly through distinct dynamic phases, vocalist Will Blackburn’s effortlessly toggling between a delicate croon and an anthemic howl. With “Coyote,” the group distills its already potent arena-ready indie rock all the way through the song’s powerful crescendo of an outro.

Thematically, “Coyote” deals with loss—something the entire band has coped with many times over the years. “The situations and emotions behind our songs are extremely personal,” SLO guitarist Louis Duffie explains.

Cubby adds, “When I was 15, I started dating my childhood sweetheart—who is now my wife—and after our first year of dating we received the earth-shattering news that her best friend, Lizzy, had committed suicide. She was the sweetest, happiest, and kindest girl in our entire high school and to believe she would take her own life was unfathomable. ‘Coyote’ is that story for me—the story of the pack animal, still feeling alone despite its family joining in its howls of pain. It is the girl with the bright smile taking her life—the fallen angel. It’s the first time you meet up with all your friends and that person you all loved so much isn’t there.”

The first installment from The Volume also offers up “The Ghost of Larry Ford Jr.,” an instrumental track that tackles the next step of loss: the frustration, anger and anxiety of letting go, all seamlessly communicated sans lyrics. The stylized, labyrinthine track sounds like a Wes Anderson films looks, along the way deftly mapping the chaotic trajectory of a mind in mourning.

Stop Light Observations may be blazing their own trails, but they want everyone to join them on their journey—fans, friends and family, past and present. “The Volume releases will ultimately be defined as a series—a voice for the voiceless. A podium for those who have yearned for the opportunity to share their own stories of struggle, passion, and love,” vocalist Will Blackburn explains.

“We live in an era of polar divisions perpetuated by fear,” Blackburn continues. “And the divide seems to be growing exponentially. But if we turn off the cable news channel and walk out our front doors and speak to our neighbors, we may find that our struggles, while they vary, are often quite relatable. It is my hope that trough this style of releasing music that we may open up the conversations that need to be addressed most in today’s America. All are equal and all opinions should be heard with hopes of perpetuating peace and understanding. Love is the way and this is the path we have chosen to move forward.” 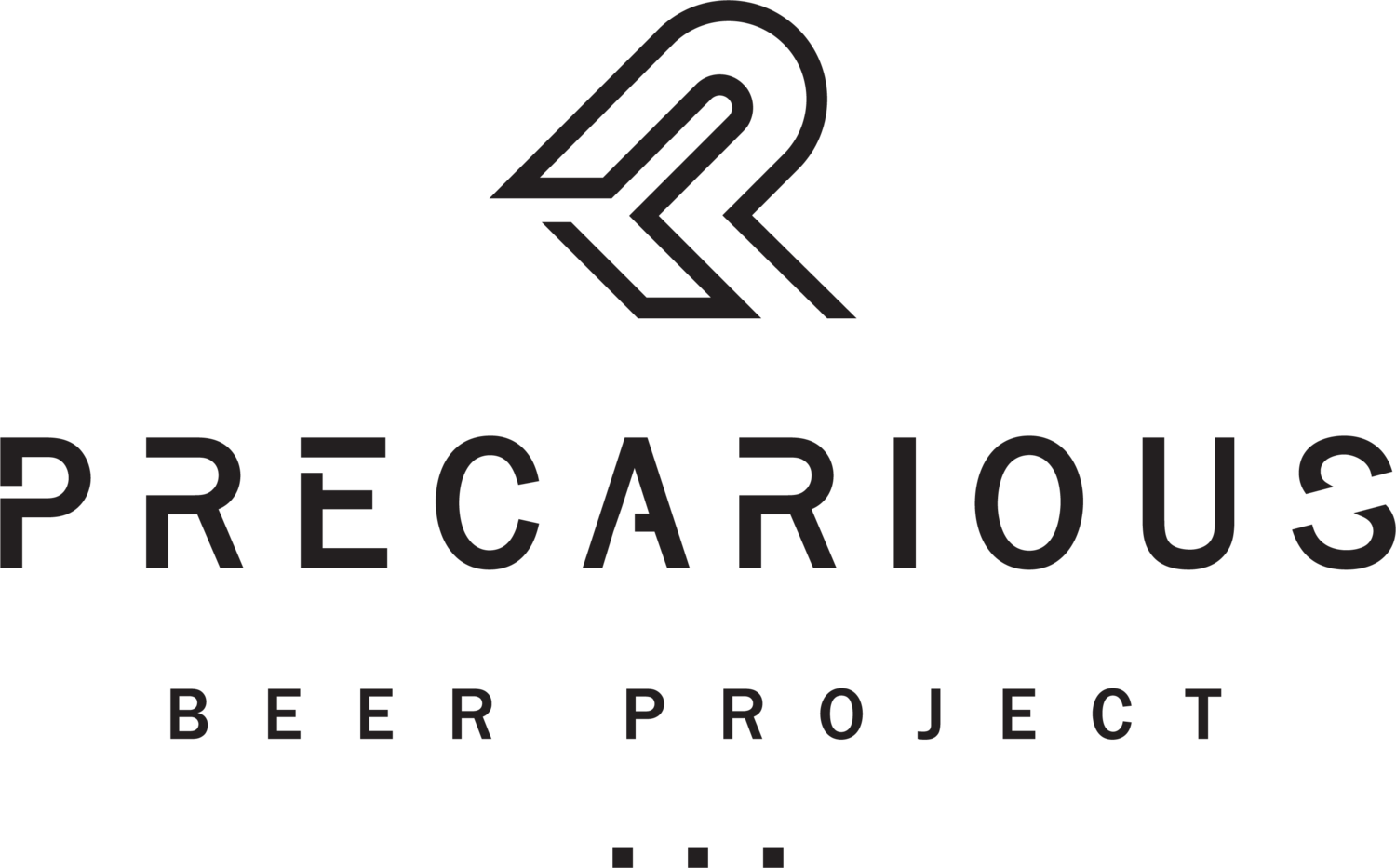