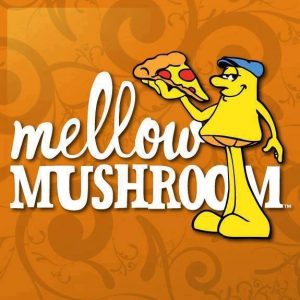 Williamsburg, VA – From serving his country as a U.S. Navy Commander to serving his community and the customers of his Mellow Mushroom Pizza Bakers restaurants, giving back to others and his community has been the principal compass guiding Gray Nelson’s entrepreneurial ventures.

Another factor for Nelson was an exceptionally delicious stone-baked pizza Nelson and his wife, Navy Commander Cameron Nelson, shared at a Mellow Mushroom Pizza Bakers restaurant.

Nelson was on active duty and stationed in Pensacola, Florida as a pilot instructor when his dreams of becoming a restaurateur took flight. He vividly remembers the life-changing evening with his wife when he sampled the best pizza he had ever tasted – pizza so tasty and mouth-watering that he was inspired on the spot to open a franchise to serve it to others.

Nelson and his wife were enjoying a weekend getaway in Destin, Florida when faced with a common date night dilemma: where to eat. Neither of them could decide and chance decided for them.

“We get to a stoplight and on the left-hand side there is this Mellow Mushroom Pizza Bakers restaurant and I said, ok well let’s grab some pizza, and we went in had a great experience. The pizza was so good we didn’t even get through two or three slices and I mentioned to my wife when I retire from the Navy, we should open up one of these,” Nelson recalls.

Nelson, who is a retired Navy Commander has lived and tasted pizza all around the world – from Italy to Chicago to New York – knows good pizza and was confident in the decision, as was his wife. But initially their dream would have to be shelved.

“They had to put that on hold for about 13 years because Gray was an active duty officer in the U.S. Navy, and he was busy defending us and our freedoms while holding on to his dream,” said Williamsburg Mayor Paul Freiling at the restaurant’s grand opening and ribbon-cutting ceremony last fall.

Upon his retirement, the determined Navy pilot and man of his word arrived at his dreams with the same precision he used to land U.S. Navy planes. His pivotal date night was in 2002. Fast forward years later, Nelson owns and operates two bustling Mellow Mushroom restaurants.

Fortunately for the residents, tourists and students of Williamsburg, one of his Mellow Mushroom restaurants landed in Colonial Williamsburg’s Merchants Square, filling a void and providing Merchants Square with an eclectic pizza restaurant that serves up pizza and a dining experience unlike any other restaurant.

The locations of his restaurants, one in Newport News and the other in Williamsburg, were mapped by the pilot’s design as well.

“Williamsburg has a special place in my heart,” he says. “My father went to the [College of] William and Mary and graduated in 1966. And my wife and I have a great affinity for the Hampton Roads area as we were married here and have been stationed here a number of times.”

His Williamsburg restaurant is down the street from the college and features his father’s college diploma on one of the restaurant’s wall.

As a retired Navy Commander who is committed to service and giving back, these locations provide Nelson a chance to do precisely this – give back to the communities that are meaningful to him and his wife.

Currently, Nelson has about 75 employees at his Newport News location and 100 employees at the Williamsburg restaurant.

“For many years I had the benefit of serving our country, and I think the leadership side of business, being able to lead and inspire others to do great things, was the most appealing to me,” he said.

Opening his Williamsburg location granted Nelson an opportunity to provide the community with a unique dining establishment, while paying homage to the town’s revolutionary roots – historically and musically.

Since each Mellow Mushroom franchise features original themes and art, Nelson allowed his passion for music and history take creative flight when planning the ambiance for his restaurant, which showcases one of the best open-air patios in Merchants Square. 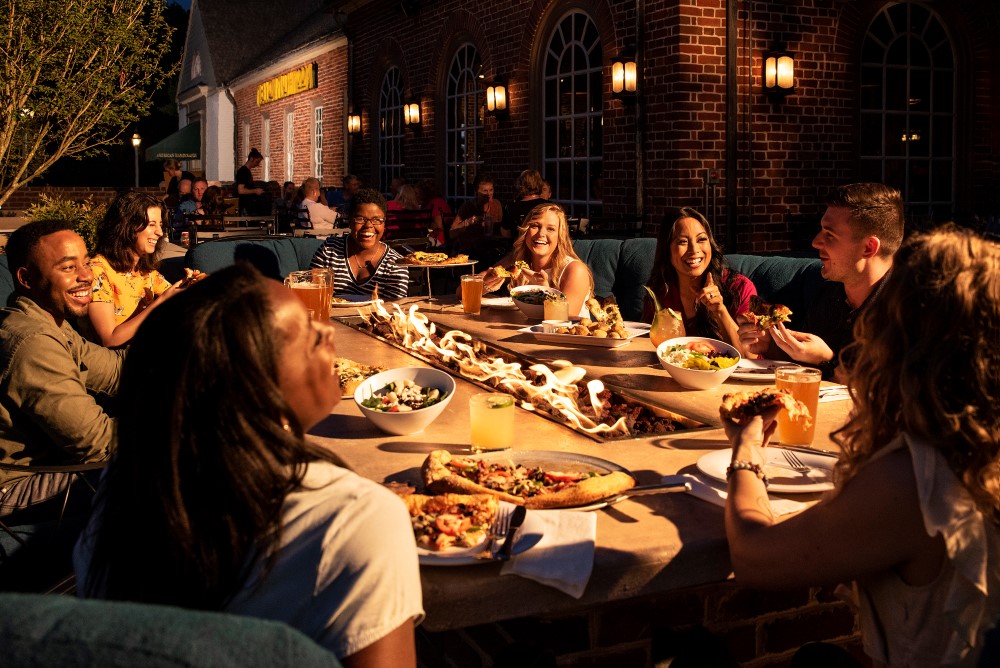 To decorate the expansive 3,750 square foot restaurant which seats up 229 guests, Nelson combined an eclectic mix of modern and British invasion rock ‘n’ roll and the colonial town’s historic connection to Great Britain. In addition to the Beatles and other rock inspired murals and art, one can find images of King William and Queen Mary at the establishment.

“The music side of the art has some of my favorite bands from growing up, like Modern English and The Cure. There are also nods to the Beatles; when people see them, they’ll understand the references,” Nelson said in an interview.

Serving “something” for everyone

In addition to listening to great music and taking in the unique atmosphere, there is another draw to this Merchants Square restaurant: its delectable pizza which customers vow is the best pizza they have ever tasted.

Whether vegetarian, meat-lover or a foodie fan of lighter fare, Mellow Mushroom’s extensive menu features plenty of tasty options for everyone. When asked what he recommends on the menu for new guests, Nelson said, “It depends on their preferences.”

“Carnivores love the Mighty Meaty – pepperoni, bacon, ham, Italian sausage, and ground beef. The herbivores enjoy the Veg Out, which has spinach, Roma tomatoes, mushrooms, black olives, onions, and green peppers. Put them together, without the spinach, and you have our House Special.”

For the rare non-pizza lovers, its menu features delicious hoagies, calzones, salads, desserts and a wide-range of appetizers, from a “Magic Mushroom” soup to garlic cheese bread to oven-roasted wings to a meatball trio. For those seeking pizza outside the box, the menu has a “Unique” section, which includes a “Thai Dye” pizza, a one-of-a-kind pizza with curry chicken and sweet Thai chili sauce. Mellow Mushroom customer, Amber Kimball, swears by the restaurant’s potato pizza. “The pizza has sliced potatoes on it, and it is the best pizza I ever had,” Kimball says.

Guests can pair their handcrafted pizzas with specially crafted beers from the Virginia Beer Company, whom Nelson collaborated with to create beers specifically for the Williamsburg locale. Nelson, a fan of stout or porter beers, highly recommends the Palmer’s Porter, a luscious, full-bodied beer created for Mellow Mushroom’s grand opening in Merchants Square last fall.

In this digital age, Nelson aims to provide the Williamsburg community with a place for people to get off their technology and commune with each other.

“I opened [the restaurant] because it provides people an opportunity to come together outside of that home environment and be somewhere and hopefully focus on who they are dining with,” Nelson says.

Nelson plans to continue his course of giving back to the region he feels gave so much to him and wife, and hints that a third Mellow Mushroom restaurant is on the horizon.

Fortunately, Nelson has an excellent co-pilot by his side in his wife, Navy Commander Cameron Nelson, to help him navigate through his entrepreneurial ventures.

“She has been incredibly supportive, and I could not do this without her love and support. I don’t know that we really understood all of the challenges of owning a restaurant or business when we ate at our first Mellow Mushroom in 2002,” he says.

“We discussed a number of opportunities in the 16 years between that first pizza and my retirement from the Navy. It has been an incredible experience, and I learn something new about myself and my crew every day.”

In addition to traditional pizza, Mellow offer gluten free pizza, vegan pizza featuring Follow Your Heart® vegan cheese and a multitude of vegetarian offerings. Every restaurant features a bar with craft cocktails and over 25 beers on tap, many of them from local breweries. Online ordering and catering are readily available.