The results — available due to months of field sampling and laboratory analysis by VIMS researchers Mike Seebo, Katie Knick, Gabby Saluta, Alison Smith, and colleagues at Maryland DNR — were announced by the Virginia Marine Resources Commission and Maryland DNR leadership.

Professor Rom Lipcius, who oversees operation of the Blue Crab Winter Dredge Survey at VIMS, says “Due to effective fishery management actions taken in 2008 and 2009, the blue crab population in 2019 remains healthy and resilient to environmental disturbances, such as hurricanes or heavy rains, and to biological pressures, such as periodic increases in predation by fish including red drum and striped bass.”

“Our marine resources are a treasure and the blue crab is an important Virginia species that demands responsible management,” said Governor Ralph Northam in the VMRC release. “I trust our managers and scientists will utilize the best information possible, along with the input of stakeholders, to ensure the continued success and longevity of this fishery.”

The combined abundance of all sizes of blue crab in the Chesapeake Bay in 2019 was 594 million, ranking 8th among the 30 years VIMS and MD DNR have conducted their bay-wide survey. Successful commercial and recreational harvest within the Chesapeake Bay depends on all sizes of blue crab at one time or another during the season, and those benefits can be supported by this year’s overall abundant crab stock. 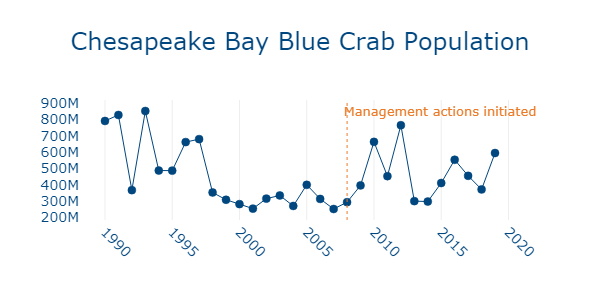 “It’s no surprise that cleaner waters, more seagrass and oyster reef habitat, and responsible catch limits have produced an upward trend in blue crab abundance,” said Virginia Secretary of Natural Resources Matthew Strickler in the same release. “This shows the kind of direct economic benefits that cleaner water and science-based management have for Virginians, and it is why Governor Northam’s new Chesapeake Bay Blueprint to achieve our clean water goals by 2025 is so important.”

“Although these abundance estimates underscore a stable blue crab resource, we still must exercise caution as we manage this iconic resource,” added VMRC Commissioner Steve Bowman. “While no reductions appear necessary, we must realize that to adopt overly liberal harvest measures would be irresponsible. I look forward to input from our staff, harvesters, and the public as we craft a balanced plan that ensures continued stability in what has been in the past a somewhat fragile resource.”

The recent survey indicates a total abundance of 271 million adult male and adult female crabs. This is 31% higher than in 2018 and remains well above the 30-year average of 199 million crabs. Lipcius attributes the higher than normal abundance estimates for all life stages to “An abundant spawning stock over the past few years and favorable environmental conditions in 2018, such as the mild winter.”

The abundance of mature female crabs, which will spawn in late May or mid-summer of 2019, was estimated at 190 million — above the 1990-2019 average of 126 million. This 2019 abundance of potential female spawning crabs is 29% higher than in 2018. The abundance of spawning-age female crabs has averaged 163 million during the last 10 years, as compared to the average of 82 million from 1998-2007, an era that coincided with several overfishing events. Since 2008, overfishing has not occurred. The 2019 female spawning stock is the 5th-largest since the survey began and remains well above the minimum safe threshold of 70 million crabs. 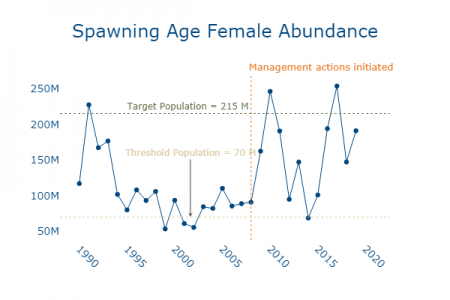 This year’s survey results also show a 93% increase in the abundance of juvenile crabs— those measuring 2.4 inches or less in carapace width — from 167 million to 323 million. These young crabs will grow large enough for harvest by commercial and recreational fisheries late in the summer and represent the major contributor to next year’s reproductive effort. The continued abundance of juvenile blue crabs in the Bay depends on many environmental and biological factors.

The Winter Dredge Survey, which VIMS and Maryland DNR have conducted annually since 1989, is the primary census of the Bay’s blue crab standing stock. Survey scientists employ crab dredges that sample blue crabs at 1,500 sites throughout the Chesapeake Bay. Sampling during winter, when blue crabs are usually buried in the sediment and stationary, allows them to develop, with good precision, estimates of the number of crabs present in the Bay.

The Chesapeake Bay Stock Assessment Committee, a subcommittee of the Sustainable Fisheries Goal Implementation Team, is reviewing the recent survey results and will release its full analysis in its 2019 Blue Crab Advisory Report this summer. The annual advisory report is used by managers as they review and update fishery regulations. The Bay jurisdictions continue to cooperatively manage the Bay-wide blue crab stock.

The VMRC will begin discussions with the Commission’s Crab Management Advisory Committee to provide guidance to the Commission concerning the course of action for 2019 that promotes the health of the blue crab stock and its fisheries. The Commission will be briefed on these survey results at its May 28 meeting.

This article was a collaborative effort among administrators and staff at VIMS, VMRC, and MD DNR.