Blast from the past: Gen. Washington’s daring Christmas Day feat

In this letter, printed on Jan. 10, 1777 in the Virginia Gazette, General George Washington writes about his great success in battle immediately after his famed crossing of the icy Delaware River. The moment was a turning point in the Revolutionary War, as most of Washington’s campaigns had faltered and his compatriots were losing faith in him. Washington’s crossing of the Delaware River is widely considered one of the most daring strategic moves in his military career.

This morning CONGRESS received the following letter from General Washington.

I HAVE the pleasure of congratulating you upon the success of an enterprise, which I had formed against a detachment of the enemy lying in Trenton, and which was executed yesterday morning.

The evening of the 25th, I ordered the troops intended for this service to parade back of McKenky’s ferry, that they might begin to pass as soon as it grew dark, imagining we should be able to throw them all over, with the necessary artillery, by 12 o’clock, and that we might easily arrive at Trenton by five in the morning, the distance being about nine miles.

But the quantity of ice, made that night, impeded the passage of the boats so much, that it was three o’clock before the artillery could all be got over, and near four before the troops took up their line of march.

I formed over my detachment into two divisions, one to march up the lower or river road, the other by the upper or Pennington road. As the divisions had nearly the same distance to march, I ordered each of them immediately upon forcing the out guards, to push directly into the town, that they might charge the enemy before they had time to form. 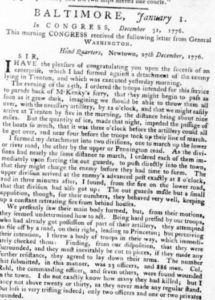 The upper division arrived at the enemy’s advanced post exactly at 8 o’clock, and in three minutes after, I found, from the fire on the lower road, that the division had also got up: The out guards made but a small opposition, though, for their numbers, they behaved very well, keeping up a constant retreating fire from behind houses.

We presently saw their main body formed, but, from their motion, they seemed undetermined how to act. Being hard pressed by our troops, who had already got possession of part of their artillery, they attempted to file off by a road, on their right, leading to Princeton; but perceiving their intention, I threw a body of troops in their way, which immediately checked them.

Finding, from our disposition, that they were surrounded, and they must inevitably be cut to pieces, if they made any further resistance, they agreed to lay down their arms. The number that submitted in this manner, was 23 officers, and 886 men. Col. Rohl, the commanding officer, and seven others, were found wounded in the town. I do not exactly know how many they had killed; but I fancy not above twenty or thirty, as they never made any regular stand. Our loss is very trifling indeed, only two officers and one or two privates wounded.