“We are not enemies, but friends. We must not be enemies. Though passion may have strained it must not break our bonds of affection.”

Abraham Lincoln stated that in his inaugural address of March 1861.

He couldn’t fathom the creation of social media, nor the impact it would have on the way we view the politics of people we may or may not even know, or the opinions we form about them as a result. Perhaps no one else could, either.

In her book Frenemies: How Social Media Polarizes America, William & Mary Associate Professor of Government Jaime Settle tackles an issue at the heart of social and political discourse in this country. She said she is addressing two distinct audiences: academic colleagues she thought don’t ask the right questions about political communication on social media and the mass public who uses social media day in and day out. They recognize that there might be some sort of problem in how things are interpreted but don’t have a context to understand the real consequences, she said.

“It’s the extent to which a group of people think that they are polarized and harbor negative evaluations of the people with whom they disagree,” she said.

Some of her academic colleagues have been effusive in their praise.

It’s “easily the most comprehensive, theory-driven examination of social media and political polarization,” said Diana Mutz, Political Science and Communications professor at the University of Pennsylvania.

It “challenges assumptions that pundits and scholars have about how the process works. The book will set the standard for future media and politics research,” added Marc Hetherington, Political Science professor at the University of North Carolina at Chapel Hill.

The book was years in the making, Settle said. 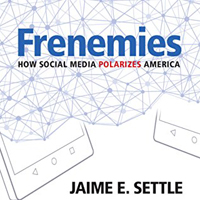 “In grad school I had done some work with Facebook and had the access to use Facebook data to try and answer questions that I cared about,” she said. “Coming out of that project I realized we didn’t really have a good understanding of what behavior on social media meant. Why is it that people would write status updates about politics?  What was the consequence of hitting the ‘Like’ button? It took me a few years to think about what the behaviors really meant and how we could understand what people were doing on social media and to think about the consequences of it.”

Settle conducted several types of studies in pursuit of answers. Among them was one in which she asked a nationally representative sample of Americans different questions about the frequency of social media and the ways people use social media for political purposes. She assessed the extent to which they were psychologically polarized about people on the other side of the political aisle. She asked people to tell her more about the people in their network on Facebook who actually posted the most political content. It allowed her, she said, to look at the direct ties people had for making judgments about people they identified as “friends” and social contacts but with whom they might disagree.

She found that most Facebook users interviewed – 78 percent – said they rarely or ever make political posts. So how was it possible that people think they know a person’s politics by reading something that on the surface has nothing to do with politics?

“I realized and found evidence that when people post content they don’t think of as political, it still has the potential to send a signal to others as to what their political views might be,” she said.

For example, someone who posts about attending a country-music concert might well be viewed as conservative. Someone who drives a hybrid car would be pegged a liberal. People who continued to purchase Nike products after seeing the Colin Kaepernick billboards could be seen as endorsing the company’s politics, not just purchasing comfortable or stylish sportswear.

People have always had ways of expressing their political preferences, Settle said. Before social media, it would be a campaign sign outside of one’s home, or a bumper sticker on one’s car or the person wearing a campaign button.

“But before, anyone who was going to see (your preference) had to be physically present,” she said. “Our ability to share political views was limited by geography and proximity. Now when you post on social media all of your friends see it, and most have hundreds of friends. In many instances that information spreads to friends of their friends. All of a sudden you have tens of thousands of people who have access to your political expression.”

Share
Facebook
Twitter
Pinterest
WhatsApp
Previous article
A truck is needed to take pajamas to children. But hey, there’s still room if you want to give jammies
Next article
Flow through your yoga practice in this unlikely venue