College-admissions officers are looking for graduates, not freshmen

High-school seniors across Hampton Roads are waiting anxiously for admissions decisions from institutions such as the College of William & Mary and Christopher Newport University.

But what’s it like to be the ones making those decisions?

“We aren’t in this business to be gatekeepers,” said Robert Lange, dean of admission at Christopher Newport University. “We are trying to find a way to say yes to these students, but you can’t admit everyone.”

After high-school students submit their applications, the admissions teams at CNU and William & Mary get to work building the next freshman class. Each application is reviewed by at least two counselors and then presented to the admissions committee for review, according to Tim Wolfe, associate provost for enrollment and dean of admission at William & Mary.

When applicants are presented to the committee, at William & Mary their information is placed on a screen and specific admissions counselors advocate for the student’s admittance. Often, this can be a draining process because the counselors get to know these students through their applications and can become attached, according to Wolfe. 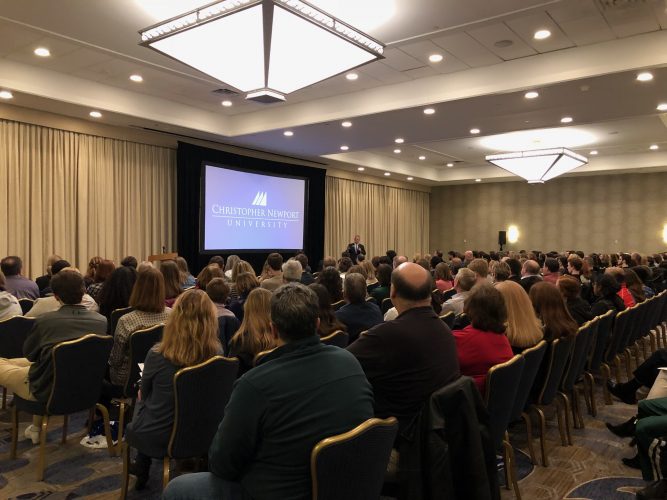 “We see it as an actual student with a story to share, instead of just a name on a file,” Wolfe said.

For Lange, getting to know the students and their families is one of the most important parts of the job.

Often, admissions counselors watch these students as they go through their undergraduate years. There are students they see flourish. And watching a student whom they admitted four years earlier walk across the stage to graduate is the best experience, according to Lange.

Getting personal through words

With roughly 5,000 admission offers each year at William & Mary, 12 professional staff reading the applications, and a class of 1,500 actually enrolling, this can be a tough task, according to Wolfe.

“We are trying to find a way to say yes to these students, but you can’t admit everyone.” — Robert Lange

It takes months to go through 15,000 essays, but counselors take time to feel like they know a student when he or she is presented to the admissions committee, Wolfe said.

CNU goes through approximately 8,000 applications in order to find the perfect class of 1,200 students, according to Lange.

According to Wolfe, a lot of students think they need to have a life-changing event to write about in their essays, but counselors are just trying to see the personality of a student in a way that can’t be conveyed through test scores and transcripts.

One essay Wolfe remembers was about a family reunion.

“They weren’t just regurgitating what we already knew,” Wolfe said. “But instead we could see how this student, living on a freshman hall, would fit in.”

In the spring, admissions officers plan new-student days. They talk to prospective students and handle families who are unhappy with an offer, according to Lange.

In addition, many high-school juniors use spring break to visit colleges.

And all of this happens while admissions counselors are laboring over picking the incoming freshman class.

It takes a certain kind of person for a job like this, one who knows how to be sensitive to those who don’t hear good news.

“Not everybody gets the decision they want,” Lange said. “And you never really get used to the difficult conversations with a student that wants to be at your institution and can’t.”