Time is running out for people who want to see all nine of the movies nominated for the 2018 Academy Awards, the winner being crowned on Sunday, March 4.  Taking in these films, however, will likely yield some unpleasant surprises for a lot of moviegoers who are squeamish about certain things that happen in a film.

Of the nine films nominated for this year’s Best Picture Oscar, viewers will see three dogs and one cat die; three scenes where someone farts, vomits or spits; two scenes where people are burned alive and two scenes depicting eye or toe mutilation.

Type in almost any movie, and Does the Dog Die will not only tell you if a dog dies in the movie, it will also tell you if a cat or horse dies, whether or not there are bugs, snakes or rats, and if there are clowns in the move, all things that tend to be disquieting to a good portion of the population.

The site also tells readers whether or not certain violent scenes are in the movie, as well as shower scenes, shaving or cutting, and even doorbell ringing.  Some of this information will likely result in a major spoiler regarding the movie’s end, which is the price to pay for knowing whether or not the content is something a viewer wants to watch. 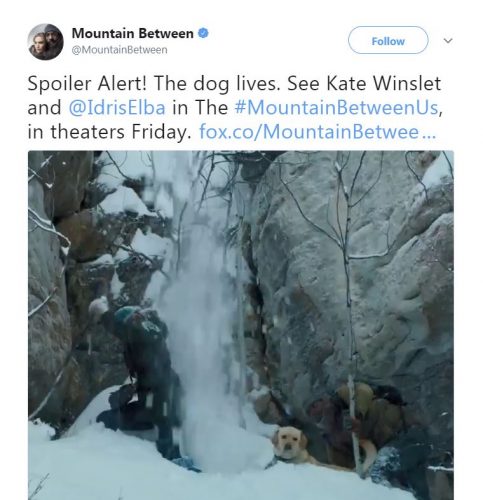 An October 2017 article in Mel Magazine reported that 20th Century Fox had to assure potential viewers of The Mountain Between Us that the dog was not going to die. “Never mind that there didn’t seem to be much concern about whether [Idris] Elba’s or [Kate] Winslet’s characters survived their snowy ordeal,” the article noted, “as long as the pooch was safe, all was well.”

Article author Tim Grierson researched this tendency to root for the dog.

“In 2013, Northeastern University tried to find an explanation for this panicked reaction in some viewers, charting the reaction of 240 locals who “randomly received one of four fictional news articles about the beating of a 1-year-old child, an adult in his 30s, a puppy or a 6-year-old dog. The stories were identical except for the victim’s identify. After reading their story, respondents were asked to rate their feelings of empathy towards the victim.” The study found that the victim who received the least amount of empathy was the adult in his 30s. As one of the study’s authors, a professor of sociology and criminology, put it, “It appears that adult humans are viewed as capable of protecting themselves,” which lessened the subjects’ compassion toward them.”

A YouTube video about the subject noted that it is easier to identify with an animal in a movie.

“It takes time and a lot of background to make us care about a person, while with animals we already care because we know we love dogs, for example.  Humans have to individually earn our affection while it is given freely to animals.”

“People like dogs even when they have just met them, because they like the idea of dogs or the stereotypical positive attributes, such as loyalty and friendship.”

From the amount of information about the topic found in one Google search, Does the Dog Die appears to have become a regular resource for one category:  animal-loving moviegoers.