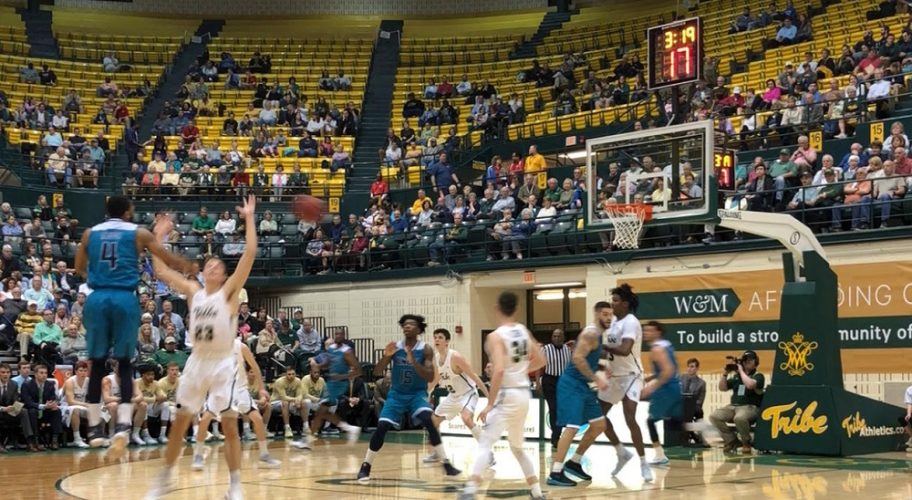 With just over a week to go before the Colonial Athletic Association (CAA) tournament, the most important component of the William & Mary men’s basketball team’s fate was already determined:  the Tribe will receive a first-round bye, along with five other conference teams, the remaining four having to play a first round on Saturday, March 3.

It’s important because no team has won the CAA tournament when having to play four games in a row, this year being Saturday, Sunday and Monday, with the finals on Tuesday, March 6.

Still, winning the last two games of the season could improve the Tribe’s draw, particularly against their first-round opponent, which was plenty of incentive for the Tribe a compelling victory Thursday night, beating the UNC Wilmington Seahawks, 96-83.

Here is a video peek over the 10 “official” segments of the game.

William & Mary plays a style of basketball that concedes offensive rebounds to the opponent, barring a lucky bounce off the rim or glass. Its defensive efforts, however, resulted in a lower shooting percentage for UNCW as well, and more rebounds for the Tribe kept the game close.

The best thing that could be said for this segment is the Tribe defended, sometimes conceding a basket, but without racking up a lot of fouls.  Nathan Knight displayed seasoned wisdom even when scored upon.

Nathan Knight is long, but he is also quick.  Inside the Tribe looked unstoppable.

Outside, with 3 for 10 shooting from three-point range, and most, if not all of the ensuing rebounds gobbled up by UNCW, kept the Seahawks close even when the Tribe heated up their own scoring.

Shoot and a miss with no rebound while the opponent takes it down and scores.  Do that a few times and the score can change quickly.  This happened all too often in the first half.

The halftime show featured a couple of pogo performers.  Check out the double back flips.

When Justin Pierce feels it, the Tribe doesn’t have to worry about rebounding.  Pierce simply went off in this segment, raising his total points for the evening to 18 with 5 of 6 from the three-point range, and giving the Tribe a seldom seen lead.

When the Tribe feels the groove, and the confidence that comes with it, all their best players play to their strengths by sharing them. Connor Burchfield and Nathan Knight work one corner as the Tribe holds on to the lead.

How do you climb ahead by 11 after scrapping for the lead all game?  You get your full court vision under control like Justin Pierce did with this pass for a three-point Matt Milon basket.

The last two minutes of the game were more like a scrimmage between two somewhat tired squads, the Seahawks well aware they could not overcome the Tribe’s lead.  Shortly after the buzzer, the winning players did their ritual run along one side of the stadium handing out high-fives to happy fans.