In the first half of the William and Mary Men’s basketball game against James Madison on Thursday, the Tribe seemed to will their powers of percentage shooting to the James Madison Dukes.

Twelve minutes into the game, William and Mary was shooting 35 percent from the field compared to their season average 52 percent, while JMU was razor sharp at 67 percent.

As the first half ticked away, the Tribe’s pace quickened and suddenly they were pressing the boards for more rebounds, trying to steal the ball, and playing with a virtual shot of caffeine. 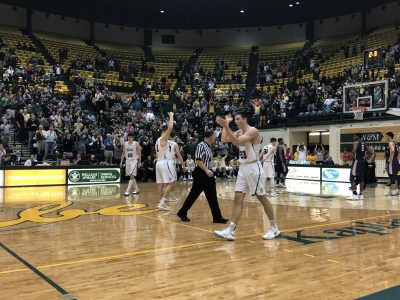 paint.  On the last possession of the half, the Tribe’s Matt Milon, with a both-legs-in-the-air three-point try, ended with the ball sailing well past the rim.

With a half-time score of JMU 45, William and Mary 28, the green and gold left the court having been in this position before, but unexpectant of JMU’s resolve to maintain a solid lead and come out of Kaplan Arena with an upset over the 4-0 Tribe.

The Tribe’s second-half opening was frenetic, but with ten minutes remaining in the game, the home team still trailed by the same as halftime, 17 points.  Not only was their 4-0 CAA record in jeopardy, so was a chance to break the school’s all-time record, five consecutive conference wins to start the season.

As time continued to tick away, William and Mary’s progress on cutting the gap in the score was met time and again by the Dukes working their way back to a dominant lead.  JMU guard Matt Lewis had a lot to do with it, his 22 point contribution often coming at times that would break the momentum the Tribe had gathered.

Despite intense efforts, William and Mary remained stuck at a ten or more point disadvantage as a seemingly endless barrage of end-to-end scurrying by both teams resulted in mostly missed baskets and little change in the score.

When the officials called the last timeout of regulation: 3:39 to go, JMU was still leading 69-56.

In the span of another minute, the Tribe closed the gap to ten points.  But on the ensuing JMU possession, Tribe forward Nathan Knight (22 points) drew his fifth foul to leave the game.  The crowd quieted as a few handfuls of spectators headed for the exits.

But Tribe forward Paul Rowley (13 points) appeared to inject a final shot of adrenaline, not only into his team, but the fans as well, with a clean three-point basket and a trailing margin that, somehow, might be eliminated.

While believing a six point deficit with a half minute to play was too much to overcome, a few more fans streamed out of Kaplan Arena, but stopped to watch from the court’s portal.  It wasn’t over yet.

It all came down to the last ten seconds and the Tribe still down by three, when Matt Milon (18 points) launched a three-point attempt that looked like so many others that night from the Tribe: hitting the rim, but bouncing out.  This one bounced in (video above) and the Tribe tied the game to force a tired JMU Dukes team to overtime.

Both teams traded mini runs to start overtime, and the Dukes led 82-81 with 1:15 remaining following a pair of Matt Lewis free throws. But Connor Buchfield made back-to-back plays to swing the game back in favor of the Tribe.

Burchfield’s second play Matt Milon for a cutting lay-up to give W&M the lead for good with 53 seconds remaining. On the ensuing JMU possession, Burchfield made a huge steal, saving the ball back inbounds. Cohn was fouled and went on to go a perfect 6-of-6 at the free throw line over the final 27 seconds to put the game away.  The vast majority of the crowd had remained, and were rewarded with a conference-perfect 5-0 Tribe effort, as William and Mary remains atop the CAA.

CAA Commisioner, Joe D’Antonio, who traveled to Williamsburg to watch the game, gathered his coat while shaking his head.

“That team sure is fun to watch,” he said.

For the game’s box scores and other stats, visit the Tribe Athletics score sheet.