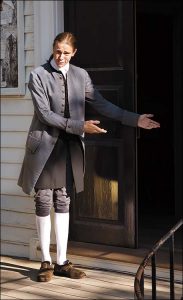 Inns, taverns and ordinaries were somewhat different in the 18th century, but they had one thing in common: they all served alcohol. Their signs were hand painted by traveling artists, and the haughtier ones had names like the “Apollo Room,” in Colonial Williamsburg’s Raleigh Tavern.

While fewer people lived in Williamsburg back then, the “bar life” was still robust, with some accounts claiming up 14 taverns operating in the city. Whether it was William and Mary students at a colonial version of a meet-up, or George Washington hanging out at Chowning’s, the taverns and pubs of Williamsburg have been a gathering place long enough to have invented the term “pub crawl.”

Fittingly, on Friday evenings through late October, Colonial Williamsburg is inviting you to join in a special CW interpretation called the Colonial Pub Crawl.

The colonial pub crawl begins at Shields Tavern where you will learn the five ingredients in every punch recipe.

Beginning at Shields Tavern, your host will toast the fun of learning while imbibing, with an inside look at tavern life, little known facts, truly unique moments in history and samples of the many kinds of drinks made and served in the 1700’s.

Among the beverages available at that time punch, in many ways, was the micro-brew of the period. Taverns and individuals were known for the recipes when it came to punch bowls. And the fellowship of dipping the drink out of a bowl made punch a common addition to dinner parties, holiday gatherings, and club meetings.

Even as early as the 1700’s, Williamsburg had as many as 14 taverns. In addition to punch, many places had imported claret, wine, whiskey and gin. The Colonial Pub crawl will include samples of distilled spirits along the trail, while you learn how people in that period experimented with distilling all kinds of fruits and vegetables.
And then there was beer. The crawl, but not the night, will end at Chowning’s Tavern and a salute to beer. You’ll learn more about colonial beer while enjoying live music and the opportunity to crawl on, happier and smarter at the same time. You can click here to learn more about tickets and pub crawl dates.

Now, for the quiz.

1. At the turn of the century, he owned one of the largest distilleries in the country.
a. Jack Daniels
b. Jim Beam
c. George Washington
d. Samuel Adams

2. Which of these institutions of higher learning had a brewery on campus?
a. William and Mary
b. Moravian College
c. Harvard
d. University of Delaware

3. Who used this as one of his descriptions for being drunk: “he’s had a Thump over the Head with Sampson’s jawbone.”
a. Alexander Hamilton
b. John Hancock
c. Benjamin Franklin
d. Patrick Henry

4. What was the most popular distilled spirit before the revolutionary war?
a. Gin
b. Whiskey
c. Rum
d. Vodka

5. Which of the following was not used to make beer?
a. Persimmons
b. Oats
c. Rice
d. Cornstalks

7. The term “punch” comes from a word meaning “five” in what language?
a. Hebrew
b. Aramaic
c. Sanskrit
d. Chinese

No matter how you did, you’ll learn even more interesting and fun info at the Colonial Pub Crawl. Oh, and the correct answer for all of the questions above is c.