Is crime increasing in the Historic Triangle? Statistics say ‘no’

During some 12-hour shifts, Ammons, 47, may respond to only two or three calls. On those shifts, she keeps busy with patrols through hotel parking lots, waving to those lingering outside their doors. She visits meager camps on the fringes of her community, residents’ homes that carry no address.

On other days, she bounces from call to call in her Ford police interceptor, with hardly a moment to spare.

Although Ammons’ days on the job are unpredictable, one thing is certain: crime is down.

Crime rates in the Historic Triangle have been trending downward since 1999, Virginia State Police data shows. Amidst a steady population increase on the Peninsula, crime is still dropping.

Despite the downward trend, social media and casual conversation often reflect a different perspective: A belief that crime is actually increasing. 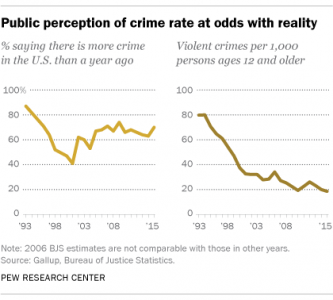 “It’s a very common belief – there’s actually a fairly high percentage of people who perceive crime getting worse,” said Graham Ousey, professor and chair of the sociology department at William & Mary. “We are not in a community or area where crime in running unchecked by any stretch.”

But media coverage, politics and a natural fear response are strong factors in people’s perceptions on crime, which most likely contribute to the misleading perception, Ousey said.

Nationally, crime rates have almost returned to a pre-1960 level, he said.

“We’re not in a particularly crime-ridden point in our history, according to the data we have,” he added.

Why do people think crime is increasing?

Across the United States, hundreds of thousands of police officers like Ammons patrol the streets, investigate crimes and assist those in need.

Surveys show 57 percent of Americans in 2016 believed police were fighting more crime than they were in 2008, even though the United States has seen a two-decade long downward trend in violent and property crimes, according to the Pew Research Center.

“The disparity to me is just the difference with a fear response,” Ousey said. “I think we particularly see news about events that may be kind of scary. They could be attacks, murders – those are the things that tend to grab headlines.”

Ousey added the crimes covered, like homicides and assaults, are also relatively rare compared to crimes like theft, burglary or “purse-snatching.”

Crime is also a hot topic among politicians, who may use crime as a “scare tactic” to meet political objectives, he said.

“In some ways, our fear response is irrational,” he said.

Local education and tourism may cause decrease

A specific reason for the decline in local crime is not clear, area police say, although some speculate citizen education programs have impacted crime.

“We’re very proud of our prevention efforts,” Rubino said. “When we see something trending up, like fraudulent crimes and some scams, we’ll put information on our websites and through social media with tips to help people protect themselves.”

In Williamsburg, Maj. Greg Riley said a declining number of tourists in Williamsburg may affect the crime rate. Tourists are often targeted in larcenies, which is one of the city’s most common crimes.

An ebb and flow in crime

Like Ammon’s experiences with both slow and busy days as a Williamsburg patrol officer, the crime rate over months and years ebbs and flows, Ousey said.

The rate will spike up and down, Ousey said, although analysts need to “smooth out” the upward and downward peaks to see the overall trend.

For Ammons, the tight-knit community of Williamsburg and the ability to get close with city residents is one of the best perks of the job.

“The city really is a close community, and I think that’s why I’ve stayed here,” Ammons said. “You have a tighter bond with people rather than big cities.”

Fearing can be reached at sarah.f@localvoicemedia.com.