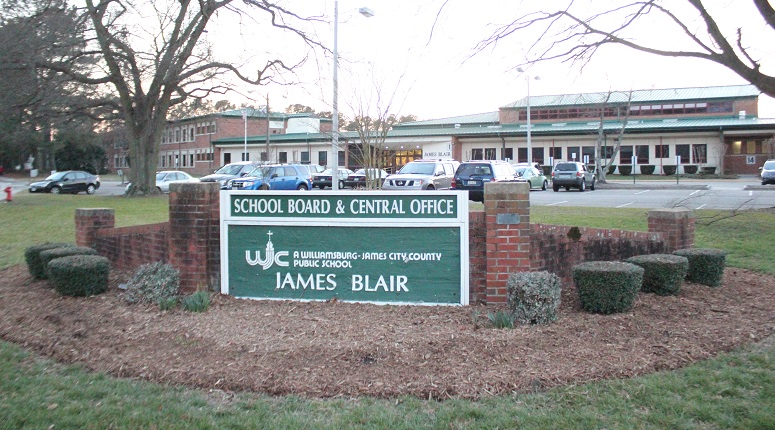 The Williamsburg-James City County School Board awarded a contract last night for the partial demolition of the former James Blair Middle School, paving the way for construction of a fourth middle school in the district.

The project will include leveling the main school building and relocating and constructing a Central Office reception area as part of the annex buildings, which will continue to function as administrative offices for the school division.

Work will begin this summer and be completed by Aug. 30.

Plans to demolish the 1950s-era school, which is located within the City of Williamsburg, has prompted questions from former students and current WJCC parents and teachers.

Alumni of James Blair High School – the building was converted to a junior high school in 1973 – asked if bricks and floorboards from the gymnasium could be recovered for former students.

During the April 12 School Board work session, Superintendent Steven Constantino said he and Snipes have worked “pretty exhaustively” to ensure artifacts from the school are properly catalogued, secured and processed.

He noted there have been plans “from day one” to create a display in the new school’s lobby with items from the original school.

“I’m very open to working with our staff and interested citizens and preserving the history of the school,” Constantino said.

Members of the Lafayette High School Athletics Boosters as well as teachers at the school have expressed concern about where students will practice when they no longer have access to the gym at James Blair.

Constantino said he is gathering information from the athletic directors at the three high schools to ensure that “all athletes have appropriate places to practice.”

Board Chairman Jim Kelly (Jamestown) said he hopes an auxiliary gym can be constructed for Lafayette by the time the fourth middle school opens. The school is set to open in September 2018.

“I think the consensus is that, after the middle school, the auxiliary gym is the No. 1 [priority],” Kelly said, noting the school and the gym are top “big ticket” items. “We’ve got to push that.”

Kelly said the school division needs to work with James City County and the City of Williamsburg to “support athletes” by making space available at recreational facilities for students, even if that would mean modifying the offerings at the centers.

The City of Williamsburg Planning Commission will review final site plans for the fourth middle school this afternoon.