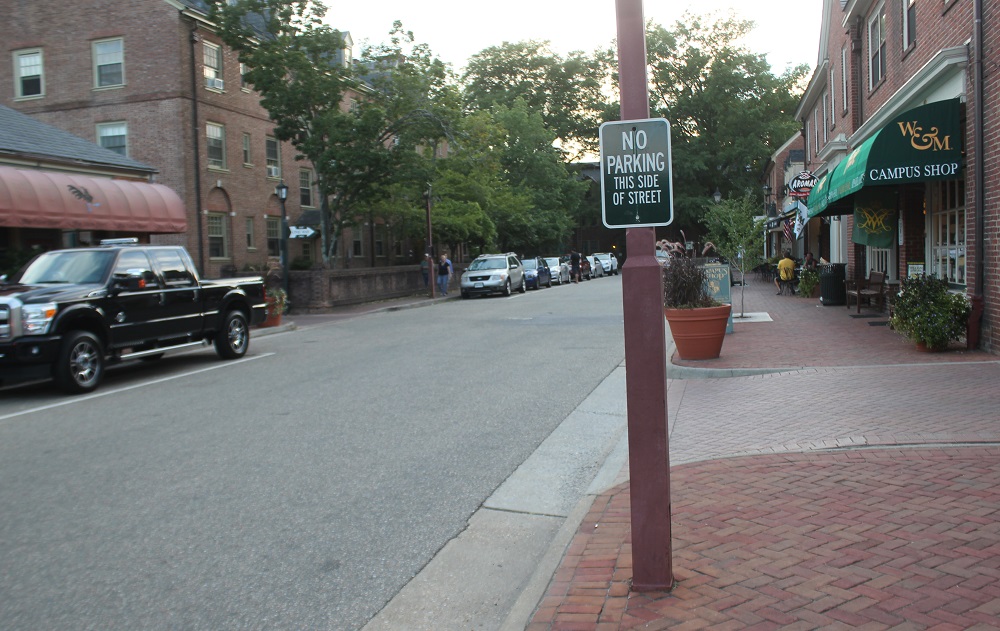 The City of Williamsburg has chosen a consulting firm to conduct its first study on downtown parking in more than 20 years.

The Indianapolis branch of Walker Parking Consultants, which has 15 offices around the U.S., has agreed to a flat fee of $65,000 to assess parking in the downtown area – from Lafayette Street to South Henry Street, near the College of William & Mary’s Law School – and present its findings by the end of June.

Click here to see a map of the area to be covered by the downtown parking study.

The study will launch the week of Jan. 25. The last study of the city’s downtown parking situation was in 1995.

City Planning Director Reed Nester presented its agreement with Walker Parking on Monday to City Council, which does not need to approve the expense because it amounts to less than $100,000. The funds will come from the city’s Capital Contingency account.

Walker Parking, which also conducted the College of William & Mary Parking and Transportation Study in 2013, is tasked with developing a parking master plan for the next 10 years that promises “an economic return and support investment in the downtown area,” according to the city’s Jan. 6 memo to council.

The request asks the consultant to conduct a study that looks into the needs of stakeholders beyond the large institutions, such as Colonial Williamsburg and the college, and include downtown merchants and employees, church communities, city residents and visitors.

Stakeholder meetings will be held in the next couple months, with specific dates not yet announced. An online survey will likely be launched in February, and an inventory analysis and a parking occupancy survey will also be a part of the study.

In order to gather data that touches on some of the city’s “busy season,” Nester said traffic counts will be conducted during the high school spring break time period when College of William & Mary students are also on campus in late March and make projections based on that foundation.

Council members emphasized the importance of properly promoting the upcoming public meetings so residents and other stakeholders can educate the consultant on their parking experiences and opinions.

“I think we’re going to have to sort of make the special effort to get people aware of the meetings and make sure they participate,” Mayor Clyde Haulman said.

The study stems from City Council’s retreat in February 2015, during which council encouraged policies that improved the city’s walkability but identified drivers’ inability to find parking downtown before they walk as a hindrance.

The city’s Economic Development Authority also pointed to downtown parking in a July 2015 letter to City Council, saying it wanted to look into the issue as part of its strategic planning process.

In September, the city drafted its request for a consultant and showed it to City Council and stakeholders – College of William & Mary, Colonial Williamsburg Foundation and the Greater Williamsburg Chamber & Tourism Alliance – before officially releasing the request for proposals in October.

The Selection Committee chose Walker Parking, which has conducted more than 250 municipal parking studies in the past five years, in December.

The memo to Council outlines some of the responsibilities expected of the consultant: