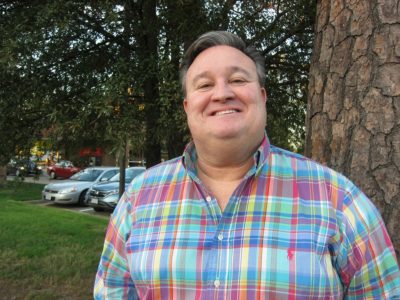 Robert George led the ballot count by one vote on Election Night, but if the tide turned in favor of his challenger, Sean Myatt, during the Dec. 1 recount, he said he would give him his York County School Board badge.

After a recount spanning nearly 10 hours, it appears George will keep his badge for another term; the unofficial recount deems George the victor with 1,018 votes, just one ahead of Myatt’s 1,017.

“It really comes down to who shows up,” George said when the recount began Tuesday morning. “You’ve got 8,000 [registered] voters and only 2,000 show up to vote. If 4,000 had shown up it probably would have gone one way or another.”

Of the 8,297 registered voters in District 5, which includes the Tabb area, 2,035 votes were cast for the District 5 School Board race.

George has represented Tabb on the School Board since 2008. In an interview with WYDaily before the election, George said he would bring compassionate leadership to the work of continuing the York County School Division’s “forward momentum.”

Myatt, who challenged George to represent Dist. 5 on the School Board, filed a petition for a recount with the York County Circuit Court Nov. 13. He said he appreciated how knowledgeable and helpful the York County registrar’s office has been throughout the electoral process.

“I would like to personally thank the York County registrar’s office and the Virginia Department of Elections for delivering a thorough and transparent recount,” Myatt said.

The York County Electoral Board recommended James Mack, the chief election officer in the Bethel precinct, and his assistant Joseph Ranalli to serve as the recount officers. Overseeing the recount, which took place at the York-Poquoson Circuit Court, were Judges Glenn Croshaw of Virginia Beach Circuit Court, Mary Jane Hall of Norfolk Circuit Court and Michael McGinty of the Williamsburg-James City County Circuit Court.

McGinty certified the results Tuesday night but the recount will not be official until results are certified by Croshow and Hall, said Walt Latham, the York County voter registrar.

During the recount, Mack and Ranalli inserted every ballot from the District 5 precincts as well as all absentee ballots into the voting machines, which printed totals for each candidate.

Ballots that were under-voted, meaning they were blank or did not include a vote for a School Board candidate, were rejected by the machine and reviewed by the recount officers.

Two ballots were over-voted, meaning voters did not clearly indicate a preference for either candidate. In each instance the voter appeared to select both candidates and the ballot was not counted, Latham said.

“I think we have officials who work really hard and voters who follow the rules. They mark their ballots so their votes will be counted,” Latham said.

Myatt said he would consider running again for School Board. He currently has a senior and a sophomore at Tabb High School, and his daughter attends Mt. Vernon Elementary School.

“I did greatly enjoy the interaction I had with my neighbors and fellow citizens at the polls,” Myatt said. “It was very rewarding and gratifying.”

The vote totals by precinct are listed below. No provisional ballots were cast for the District 5 School Board candidates: