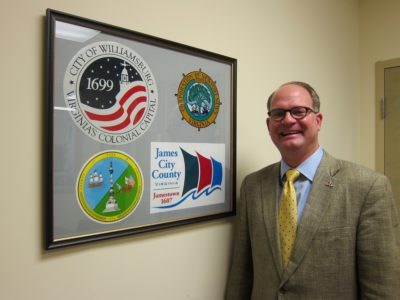 Two years ago, the model became reality when he was elected to represent the City of Williamsburg and parts of Newport News, James City and York counties in the House of Delegates.

Now, Del. Mason is vying for another two years to continue the work he has started to assist veterans, students and senior citizens in the 93rd District.

“The Virginia Peninsula needs some stability in this seat. Two years is not enough,” Mason said. “When I hold this seat, we’ll begin to provide some consistency and bring some more services back to the 93rd District.”

Mason, 48, moved to Williamsburg with his family 12 years ago and works for Visa in fraud prevention and risk management. He said his Model General Assembly experience sparked his interest in politics and led to his first run for public office in 2013, when he narrowly defeated incumbent Michael Watson for the 93rd District seat.

Although he is running for re-election as a Democrat, Mason said he considers himself a moderate “just a tick to the left of center.”

“This district requires it because this district is very wide-ranging,” Mason said. “I think we can take bits and pieces of people’s philosophies and craft a solution.”

This year Mason will face a challenger, newcomer Lara Overy (R), in the general election. Mason said it will be up to the voters to “decide if [Overy] has the qualifications for the job.”

He noted bipartisan efforts to extend the emergency custody period for individuals with mental illness, eliminating the A through F grading system for schools and reducing the number of SOL tests students must take as some of his accomplishments from his first term.

Mason said he was especially proud of his work on veterans issues, which included supporting Virginia Values Veterans, a state program that connects employers to veterans seeking jobs, and looking out for the children of veterans who may be struggling in school.

He said he did not highlight issues for senior citizens when he first ran for office, but in the past two years he said he has learned how senior citizens will be affected by decisions related to healthcare, transportation, housing and more.

“When you touch on an issue, it just spiderwebs,” Mason said.

If re-elected, Mason said his priorities would include finding funding to complete the Interstate 64 widening project, expanding train service to Newport News and providing bus service to Lackey Clinic in York County.

“We’ve accomplished a lot of things and I’m proud of what we’ve done, but there’s a lot of work left to be done,” Mason said.