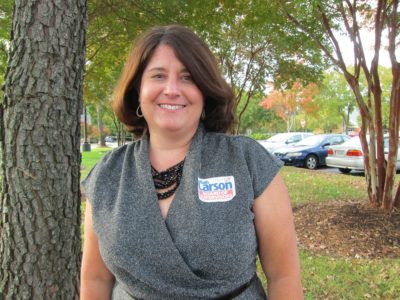 Ruth Larson said she was first inspired to run for the Williamsburg-James City County School Board because she wanted to be an advocate for children.

Now, the three-term board member is aiming to represent the needs of all individuals in the Berkeley District in her bid for a seat on the James City County Board of Supervisors.

“I am very positive about the future of this county,” Larson said. “I believe with the right people on that board dais, we can address [the issues] and really make James City County continue on its upward momentum.”

Larson (I), 53, and her family moved to James City County in 1993, living in Mirror Lake Estates and the Meadows before settling in First Colony nearly 11 years ago. Originally in the hotel business, Larson said she transitioned into childcare and worked as a preschool teacher after her son was born. She now does marketing for a home inspection company.

She volunteered to represent her son’s PTA on the county-wide WJCC PTA Council and took on leadership roles in that organization, eventually serving two terms as president. When former Jamestown representative Mary Minor retired from the WJCC School Board, Larson said she decided it was her time to run.

Larson has served on the school board since defeating opponent David Feldman in her first race for the Jamestown seat in 2005, retaining a spot on the board after redistricting made her the Berkeley representative.

“I’ve become and remain engaged in policy work and collaboration to get things done, even through tough economic times,” Larson said.

She said she decided to run for the Board of Supervisors because she does not feel the current Berkeley supervisor, Mary Jones (R), is adequately addressing the county’s future needs, arguing if a representative takes a stand based on principles, they must also offer solutions.

“You have to have solutions on how you’re going to address those issues,” Larson said. “Now is the time. We’re at a critical juncture.”

Larson will be Jones’ second challenger since she was elected to the Board of Supervisors in 2007. Jones defeated challenger Carlton Stockton by more than 400 votes in 2011.

She said her experience implementing a strategic plan for the School Board and overseeing a division-wide move to data-driven decision-making would translate well to the Board of Supervisors, which has recently begun discussing its strategic plan.

If elected to the Board of Supervisors, Larson said she would focus on preparing for impending growth, water issues, infrastructure challenges and economic development.

“It would be hard to pick one over another,” Larson said of these issues. “They all need to be addressed and dealt with in a straightforward manner and the time is now, frankly.”

She said she is collaborative, solutions-driven and a good listener. As an independent on the School Board and now in her bid for the Board of Supervisors, Larson said she has received encouragement and financial support from Republicans and Democrats alike.

“I just feel it’s important on the local level we should all be independents. Partisan politics should not have a role on the local level,” Larson said. “I think you have a better working relationship with your colleagues if this is not a partisan role. It’s working for me.”

Larson’s opponent, incumbent Berkeley supervisor Mary Jones, did not respond to multiple requests for an interview.