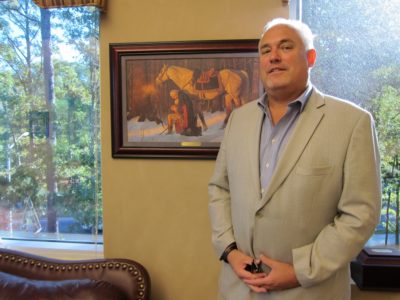 Jeff Wassmer said he believes the way to get through the bad times, whether it is in business or in government, is by making good decisions when all is well.

In his bid for the District 4 seat on the York County Board of Supervisors, Wassmer said he has the experience the board needs to make those decisions while the county is doing well.

“There have been better times, there have been worse times, but we have challenges ahead of us that are going to take leadership in making tough decisions,” Wassmer said.

Wassmer, 53, moved his family and his business to the Peninsula in 2000, settling his family in York County and his defense contracting business Spectrum in Newport News. He moved to Dare in January.

He said he has always been an active member of the community and serving on the Board of Supervisors would be part of a “natural evolution” of his involvement.

“Nobody was stepping up to run that I considered was a solid conservative,” Wassmer said. “Here is somewhere I feel like I can contribute and give back.”

He is competing against fellow newcomer Robert Holloway (I) for the seat, which is being vacated by current District 4 Supervisor George Hrichak. Wassmer (R) has been endorsed by Hrichak and Congressman Rob Wittman (R) in the U.S. House of Representatives.

He said his priorities include preserving and enhancing quality of life, focusing economic development, ensuring fiscal accountability and encouraging a respectful and responsive government.

Some of those goals can be accomplished by repurposing the Yorktown Power Station when it is scheduled to close in 2016, eliminating the boat tax to encourage residents to take advantage of the waterfront and enhancing government accountability, Wassmer said.

“We can’t give taxpayer money to people with no vision,” Wassmer said.

Wassmer said he has experience making tough decisions. In 2013, he chose to testify against his friend, Newport News investment broker Jeffrey Martinovich, after he committed financial fraud.

He had invested in a hedge fund run by Martinovich and said the experience taught him to “trust but verify” and pay more attention when making critical decisions, even in friendships.

He is now in the process of determining the future of the Bayport Scout Reservation, which the Colonial Virginia Council of the Boy Scouts of America can no longer afford to operate.

Wassmer, the president of that council, said this is an example of a tough decision he hopes will have a positive outcome for the Boy Scouts.

“We want to impact the lives of youth,” Wassmer said. “We’re going to have to probably let that camp go so that we can get back to paying attention to what we’re supposed to.”

If elected, Wassmer said he hopes his business and leadership experience, as well as his 11 years of active duty military service, can be his contributions toward the success of the county.

“I would like people to feel as though we have respectful government and that we made tough decisions and our future is brighter because of those decisions,” Wassmer said.