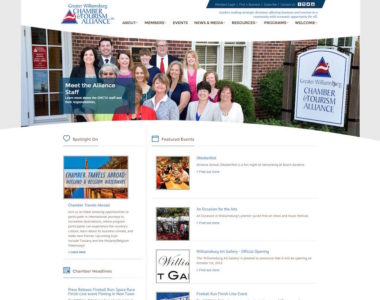 The Greater Williamsburg Chamber & Tourism Alliance recently launched its new website after more than a year of behind-the-scenes planning and tweaking.

“We knew we needed this when I walked in the door,” said Karen Riordan, who began her tenure as president and CEO in early 2014.

The previous website was 10 years old, which Riordan described as “ancient” for that kind of technology.

The process to find a company to create the new site began shortly after she came on board, with the Alliance accepting a bid from Orases.

“We wanted a company that specialized in nonprofit sites, someone who understood our needs for the new site,” Riordan said.

In the preliminary stages of developing the site, the Alliance identified three main goals they had in mind for the updated website.

First and foremost, Alliance members wanted the site to be responsive across multiple platforms.

“Making sure it is a good user experience and could accommodate mobile traffic was high on our wish list,” Riordan said.

Second to that concern, the Alliance prioritized making the site a more relevant resource for the entire community. The key feature that resulted from this goal is the new community calendar, which is visible not only to members but also non-members in the community and tourists to the area.

Finally, the Alliance hoped to create a website that would actively involve members of the organization in business-to-business networking and keep them abreast of Alliance news. This includes posting the agendas and minutes from committee meetings so interested parties have easy access to that information.

Though the website is fully launched and functional at this juncture, the Alliance also has plans for future features to be added within the next few months.

Chief among them is the capability for businesses to post information about promotions, news releases and job listings directly to the site.

“We think of it like a mini career center,” Riordan said. “It’s another way we can facilitate networking in the community and act as a marketing vehicle for our members.”

The Alliance hopes to have that feature added to the website by the end of 2015, and plans to send an email out to members upon its addition.

“It will take a little bit of retraining to get people to go to the website rather than call us directly. We’re still happy to get calls, but we’re also happy about the potential of the site to provide a lot of good info to our members,” Riordan said. “It just feels so much easier to work with all around.”