This Week in Crime: JCC SWAT Team Arrests One in Cocaine, Pot Bust 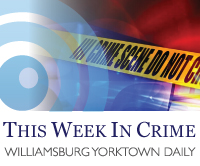 This week, a man is suspected of selling marijuana and cocaine, and a woman was arrested after police found multiple jars and bags of marijuana in her car.

Maj. Greg Riley with the Williamsburg Police Department said an alarm went off at the liquor store off Richmond Road at around 1:30 a.m. Thursday.

When officers arrived, they found one of the store’s windows had been shattered by a brick.

Police reviewed the store’s surveillance footage and saw a black male wearing dark clothing enter the store through the window, grab several bottles of liquor off a shelf and hand it to another suspect, who placed the bottles in a backpack.

A description of the second suspect is not available.

Riley said the two then fled on foot in the direction of Monticello Avenue. There are no suspects in custody at this time. Anyone with information on the crime is asked to call Crime Line at 888-LOCK-U-UP.

The stolen bottles are estimated to be valued at around $150.

Two teenage boys are facing charges after authorities say they broke into a garage, stole a golf cart and spray-painted it.

The 15- and 17-year-old boys, who are not being named, are also accused of breaking into a home close to the first house and stealing bottles of liquor, jewelry and cash.

The first break-in and theft occurred at a home in the 400 block of Marks Pond Way in the Oaks at Fenton Mill neighborhood off Fenton Mill Road.

Lt. Dennis Ivey with the York-Poquoson Sheriff’s Office said deputies were called to the residence June 25 and were told one or more suspects went into the attached garage sometime between midnight and 5:30 a.m. and stole a golf cart valued at about $2,500.

Authorities do not know whether the garage was locked at the time of the theft.

Investigators found the golf cart near the woods around the neighborhood and determined it had been spray-painted a brown color by the suspects.

The other theft occurred on the same night in the 100 block of Londonderry Lane, when the boys allegedly broke in through the back door of the garage and stole bottles of liquor, plastic cups, a motorized scooter, a cell phone, jewelry and cash, all of which was valued at more than $200.

Deputies with YPSO are asking the public for help in identifying a woman accused of using a stolen credit card number at a Walgreens.

A post on the YPSO Facebook page said the crime occurred May 29 at the Walgreens in the 6600 block of Route 17.

The suspect is accused of using the credit card number to purchase $265 worth of items from the store.

Anyone with information on the suspect is asked to call Crime Line at 888-LOCK-U-UP or the Sheriff’s Office Facebook tip line at 890-4999.

A 20-year-old woman is facing a felony charge after police say they found jars of marijuana in her car.

The woman, James City County resident Taylor Ann Clayton, was pulled over after running a stop sign near Longhill and Olde Towne roads Wednesday just after midnight, according to police.

The officer who pulled her over smelled a strong odor of marijuana upon approaching the car and saw a mason jar containing the drug in the floor behind the driver’s seat.

The officer then searched the entire car and found a bud of marijuana in the cup holder of the center console, along with electronic scales and another glass jar with what appeared to be marijuana, authorities said.

The trunk of the car also contained two large bundles of suspected marijuana wrapped in plastic.

The officer arrested Clayton and charged her with felony possession with intent to distribute marijuana.

A 36-year-old man is in custody after a local drug task force investigation revealed cocaine and marijuana in the suspect’s home.

Stephanie Williams with the James City County Police Department said officers obtained a search warrant at around 5 p.m. Wednesday for the home of Kenneth Len Shackleford.

Authorities have arrested two Hampton residents who are accused of stealing and cashing checks in James City County.

Police said 37-year-old Jason Wayne William Hill broke into his relative’s home in Hampton and stole checks, which he and 30-year-old Jennifer Renee Haynes later used to write a total of $768.51, which they cashed at multiple Food Lions in James City County between May 19 and 26.

Authorities said Hill and Haynes were captured writing the checks on one of the stores’ surveillance cameras.

Police arrested the two Thursday in King and Queen County and charged them with four felony counts each of uttering.