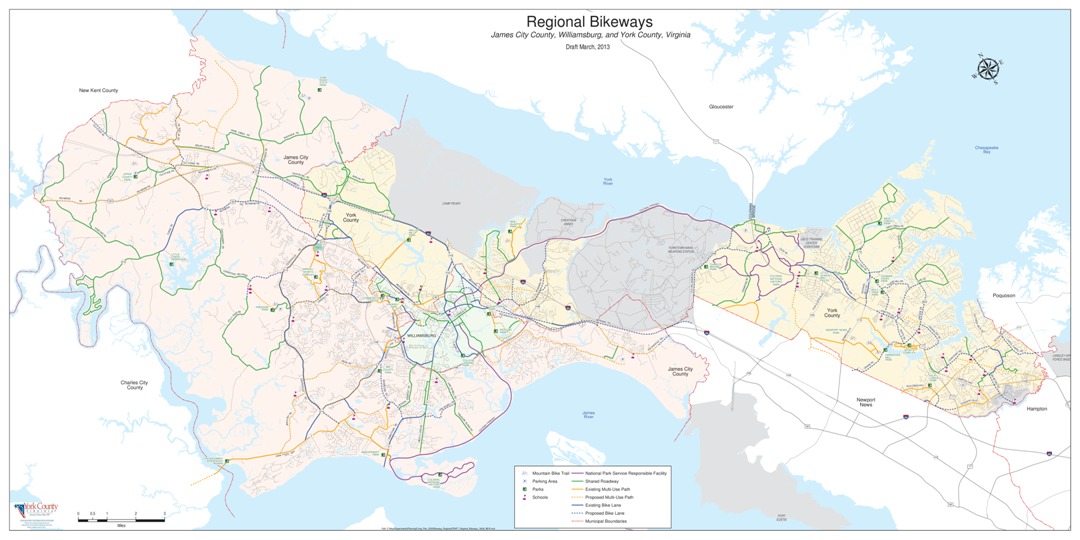 The board voted 4-1, with Supervisor Mary Jones (Berkeley) opposed to approve the updated Regional Bicycle Facilities Plan. The plan was first created in 1993, but has evolved over time in an effort to have an effective regional bike system.

For 10 months, staff members from James City and York Counties and the City of Williamsburg worked to update the plan in an effort to achieve four goals: providing bike trails to parks and schools, eliminating dead-end routes, having realistic bike paths and incorporating multi-use paths from the 2011 James City County-approved Pedestrian Accommodation Plan.

The plan was updated to remove corridors determined to be inappropriate for biking and “share the road” designations — which gives bikes and cars the ability to share the road in place of separate bike lanes along the road. It also added additional trails to the Stonehouse District, and bike accommodations are no longer recommended on the proposed Mooretown Road extension. Also, relocated Route 60 in the Grove area was included in the plan map.

The Planning Commission reviewed the proposed updated plan and held a public hearing in August; five speakers spoke in support of the plan. The commission voted unanimously, with two members absent, to recommend approval to the board.

On Tuesday, the Board of Supervisors held a public hearing, where eight speakers voiced support and opposition to the updated plan.

Speaking against were five citizens. Joseph Swanenburg said he heard a majority of the public speak against bike paths at previous county meetings; Sue Sadler echoed this sentiment. Sadler continued to say she doesn’t think the bike paths are a vital public service.

“We are not in favor of any more bike paths,” Sadler said.

Also speaking against were Marjorie Ponziani and Roseanne Reddin, who were concerned the bike path plans were an attempt to control behavior by forcing citizens to ride bikes rather than driving their own vehicles.

“We just can’t get enough [bike paths],” Bartram said. “It allows me the opportunity to not have to drive a car.”

Supervisor Jim Kennedy (Stonehouse) expressed some concerns over specific areas in the county still being included on the plan, including Cranstons Mill Pond Road in Toano, because the roads are dangerous for bikers.

Kennedy said the plan was improved, and said he would have had a hard time supporting the plan if it was a request to allocate funding to additional bikeways, which is not the case.

Additionally, Kennedy said he has concerns over enforcement: On the weekends, he said he receives calls from residents over traffic backups where bikers are not riding single-file in groups, but said enforcing laws on bikers is hard to do.

“With bikes, we seem to look the other way,” he said.

Jones said she would not be supporting the updated plan because she didn’t hear resounding support from the citizens.

“I absolutely love to bicycle. I manage a sporting goods store and we sell a lot of bicycles to the community,” Jones said.

The estimated cost and impact on property owners in the future concerned Jones, who said the bike plan is not a priority today.

Responding to Jones’ comments, Supervisor Andy Bradshaw (Powhatan), said the board doesn’t need to analyze potential impacts on property owners when a supplement to a plan is introduced; he was supportive of having a plan for the future.

Supervisor Jim Icenhour (Jamestown) said he has heard many of his constituents say bike paths are appreciated in the county. He said he heard about half of the citizens at a county meeting express distaste over the bike paths, but that dissent would not sway the support he had heard.

“So when I look at 20 to 40 people who are really violently against it and then look at the bulk of the people that I make contact with in my duties as a representative, I feel like I am representing the interest of the citizens of this county in supporting this plan,” Icenhour said.

Virginia Symphony Returns to Perform Under the Stars at Yorktown Waterfront

What to Expect When Planning a Memorial Service

Virginia Symphony Returns to Perform Under the Stars at Yorktown Waterfront

What to Expect When Planning a Memorial Service