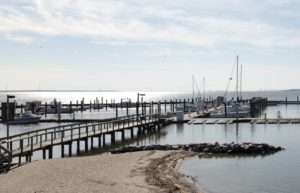 James City County will continue to fight Dominion Virginia Power on proposed overhead power lines after the Board of Supervisors voted to allocate additional funds toward expert representation and witnesses in the ongoing case before the Virginia State Corporation Commission.

Last summer the board appropriated $50,000 for legal and expert witness costs associated with the ongoing SCC case, which began after James City County officials tried to urge Dominion to run the power line under the river to protect the county’s historic viewshed. Several generation units at the Chesapeake and Yorktown power stations are planned for retirement by 2015, creating a need for the additional power line.

Sands Anderson has been retained as the firm leading the county’s defense, and RLC engineering firm is the county’s principal expert. An expert on photo simulation was also retained.

When the board was initially asked to provide funds for the case, supervisors agreed to spend up to $100,000. Increased costs due to continuances prompted the need for an additional funds and, at its Tuesday meeting, the board unanimously voted to allocate another $200,000 from the county’s contingency fund toward the case, as well as $50,000 from the Save the James Alliance.

BASF Corporation, a chemical company with property in James City County near the proposed Skiffes Creek Switching Station, has committed $20,000 toward the case. The funds announced Tuesday bring the total up to $320,000; $300,000 of that was appropriated.

The county is anticipating at least $30,000 more from the Save the James Alliance, and the James River Association and Robin Carson on behalf of Kingsmill Resort have also committed an undisclosed amount, according to County Attorney Leo Rogers.

The county will continue to pursue funding from additional sources, he said

“I don’t want James City County to be carrying the weight of this, and it’s significant,” said Stonehouse Supervisor Jim Kennedy.

Roberts Supervisor John McGlennon said Gov. Bob McDonnell’s office discouraged the Jamestown Yorktown Foundation from contributing funds toward the case. McGlennon, as chairman of the Board of Supervisors, wrote a letter questioning the governor’s office about its advice to the Jamestown Yorktown Foundation. He informed his fellow board members about the letter at Tuesday night’s meeting, which prompted Kennedy to question whether McGlennon is being as open as he should be.

A cap, the amount of which is not being disclosed to the public, has been put on funding legal counsel. With that cap in place, Rogers is able to handle testimony of 11 witnesses but is not serving as the chief counsel on the trial. According to Andy Farmer, SCC education resources manager and spokesperson, there are about 48 potential witnesses from all parties involved in the case based on prefiled testimony.

James City County is fighting the proposed lines because Dominion has presented two options, and each would affect county residents and, potentially, tourists.

“We believe there are other alternatives that will provide adequate power supply and distribution to the peninsula other than providing 500kV watts, which could only be put over water,” Rogers said.

On Wednesday, McGlennon confirmed his letter to Gov. Bob McDonnell was forwarded to board members Dec. 10.