WILLIAMSBURG — The Arc of Greater Williamsburg’s inaugural Community Pickleball Challenge was a rousing success, according to organizers, raising $19,429 to benefit The Arc’s mission of improving quality of life for adults with developmental disabilities in the community.

“The goal of the Community Pickleball Challenge was to raise awareness around the fun and growing popularity of the sport of pickleball while supporting and raising awareness of The Arc of Greater Williamsburg and the amazing people we are privileged to serve,” Executive Director Pamela A. McGregor said.

The event saw 120 players in action at six participating residential/senior living communities and at Veterans Park. The first round took place May 17-20, with the second round held the weekend of May 21-22. 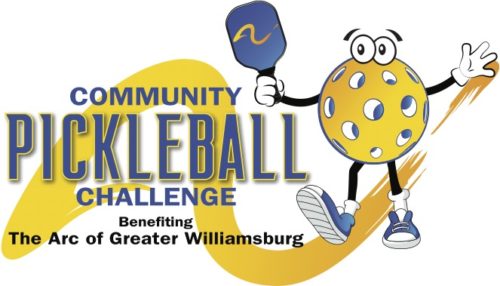 For the uninitiated, Pickleball combines elements of tennis, badminton and ping-pong on a badminton-sized court with a modified tennis net. Players use paddles to hit a wiffleball-like plastic ball with holes. The game can be played either as doubles or singles.

The sport was originally invented in 1965 on Bainbridge Island near Seattle, Washington. Since then it has evolved from its original handmade equipment and simple rules into a popular sport that has taken off throughout North America and is now spreading internationally, according to USA Pickleball.

“The community challenges brought out neighbors and friends to learn more about the fun pickleball players were having in their neighborhood and culminated with a fabulous finals event at Veterans Park hosted by The Arc,” McGregor said.

Event organizers are holding a wrap-up meeting with all the communities involved for feedback and input on June 15, and planning for a second annual event is already in the works.

The Arc of Greater Williamsburg (GW) has served adults with intellectual and developmental disabilities in the community since 1976. The non-profit organization is one of 630 Arc chapters affiliated with The Arc of the United States and The Arc of Virginia. The Arc of GW provides resources, programs, and activities for those who age out of special education at 21, serving 250 families throughout greater Williamsburg.

“From everyone at The Arc, we wish to extend our heartfelt thanks to all our players, volunteers, community partners, and sponsors who helped make our inaugural Community Pickleball Challenge a smashing success!” the organization said on its Facebook page.

For more details on the event, including a full list of winners, check out the CPC website.