Bryan Austin as James Madison
1 of 3

WILLIAMSBURG — Most people wake up every morning and go to work at an office, a brick and mortar store, or a restaurant. Bryan Austin goes to work at Colonial Williamsburg as James Madison.

Austin has been performing as the 4th President of the United States for about eight years now. However, the Colonial Williamsburg actor has been studying and improving his craft ever since he was a child. His passion for the arts began at a much earlier stage in his life.

“For about as long I can remember I’ve really been in love with storytelling,” said Austin. “A lot of that comes from my grandmother who I spent a lot of time with growing up. She was a really really amazing storyteller. She had a story for everything.”

Austin stumbled into his admiration for theatre when he was around 12 years old. It was during his English class in middle school when he started reading small plays that would spark his interest in the arts.

“You have those little reading modules in English class that are small plays. I was sort of a misfit in school, and there was one particular day in the 6th grade where we did that module and suddenly something clicked and I found my passion right there. I went home to my parents and said ‘I want to be an actor’ and they said ‘okay.'”

Austin’s parents were very supportive of their son’s newfound interest in acting. Within a year, he found himself spending his summer at a theatre camp in Virginia Beach. Austin would end up going to the camp every summer from the age of 13 until 19 years old.

“I always knew I was going to tell stories,” said Austin. “I wanted to have a job that was going to affect people.”

Austin graduated from Christopher Newport University in 2010. Immediately afterward, he landed work in the world of professional theatre. He packed his bags in the winter of 2011 and moved to Louisville, Kentucky. For the next couple of years, he performed Shakespeare with a professional theatre company.

“I really loved doing Shakespeare and during that time I really fell in love with language,” said Austin. “So much of that experience has transitioned to the work I do at Colonial Williamsburg because so much of that is quite literally the art of Rhetoric.”

Austin would eventually find his way back to Virginia when he joined the Virginia Stage Company for nine months as part of their emerging artist’s ensemble. A job that not only taught Austin a lot about theatre but also was a job that held a lot of meaning for the upcoming actor.

“So I told my parents I wanted to be an actor. One of the first things they did was they took me to see a Christmas Carole at the Wells Theatre, which the Virginia Stage Company does every year,” said Austin. “So I got the job at the Virginia Stage Company early in my acting career and was actually in a Christmas Carole. It was only a couple of months prior that my grandmother actually passed away. It was this very beautiful experience for me to be standing on this stage that, as a little boy, I sat and watched a show in. I remember there was this beautiful song that we sang at the end of the first act. There was a moment when all the music stops and all the actors face out and we all just sing without musical accompaniment. That was always such an emotional thing for me because I’d look up at the third floor where there are no audience members and I would just sort of picture my grandmother sitting there at that moment. It was a really beautiful moment.”

During his time with the Virginia Stage Company, Austin taught himself six musical instruments. Towards the end of his stay with the emerging artist’s ensemble, he began looking for work in the area.

“I started looking inwards to the community. I’m from Virginia. I love Virginia, and I wanted to create something that benefited Virginia.” said Austin.

In the Spring of 2012 Austin helped organize a playwriting festival. He went out to all the local high schools and asked that if they had any students who are playwriters and if they would like to submit their plays to be read by professional actors. The festival was called,  “A Homegrown and Growing”.

There was a period of time when Austin didn’t know who he was going to be. One morning he was hiking on some trails in Williamsburg when he got an email telling him he was going to play James Madison.

The actor has spent the past 8 years performing and studying the 4th President of the united states.

“There are thousands of his letters still left behind. More than that, there’s reading lists of what he read,” said Austin. “As he was preparing to craft the Virginia plan, which is what became our federal constitution. He, for the period of about a year, confined himself to a library and he read hundreds of books on human history. In my work, it’s not only reading what he said but reading what he read to understand and grasp his political mind.”

Austin admits that though he hasn’t read everything on James Madison, he has read a lot over the years. He has grown to admire the common theme throughout the president’s work.

“I admire his ability to zoom out and look at not only history of the lens of what happened but how the constant throughline between the past and the present and the future is that human nature stays the same. In accepting that, I appreciate how Madison writes looking at human nature because it makes the things that he examines and studies so much more beneficial to a modern audience.”

Austin can be seen playing James Madison in a performance called “A Congressional Curriculum” at 1:30 p.m. every Thursday in the Hennage Auditorium. 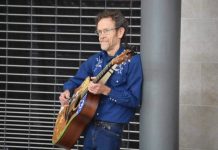 Turning Struggle into Song: These Local Musicians Produced a Full Album During Quarantine 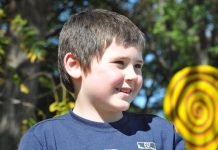