“Forever Marked by the Day” explores the timeline of the World Trade Center. 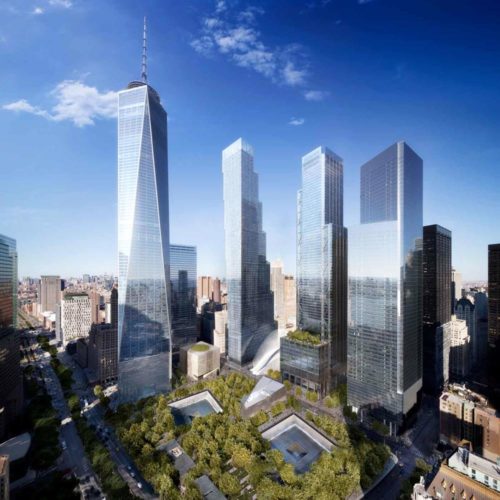 Twenty years after a day that changed our lives forever, the Muscarelle Museum of Art will commemorate September 11 through the lens of architecture with an original exhibition that examines the making and remaking of the World Trade Center.

“Forever Marked by the Day” will open on September 10, 2021 at the Williamsburg museum affiliated with William & Mary and will remain on view until January 9, 2022.

The exhibit spans three galleries, and connects the past with the present by paying homage to the architects, artists, designers and photographers who ultimately ensured that creativity triumphed over destruction.

Museum Director David Brashear will give several gallery talks over the course of the exhibition, with the first one on September 10 at 11 a.m. The talks are free.

The exhibition aims to help visitors recognize their own resilience by providing them a place for reflection on a day that not only altered the Manhattan skyline, but also the world as we knew it.

On September 11, 2001, 19 terrorists carried out suicide attacks by hijacking planes and flying them into targets. Two of the jetliners destroyed the Twin Towers in New York City, another struck the Pentagon in Washington, D.C., and a third crashed into a field in Pennsylvania.

Architect Michael Arad, who won the design competition for the World Trade Center memorial, spoke at the Muscarelle Museum of Art in April 2021, a talk that inspired Brashear to mark the 20th anniversary of the tragedy with an exhibition that would provide an opportunity for remembering, reflecting and learning.

“Michael, in a series we called ‘Healing by Design,’ spoke about his journey to conceive, develop and build the reflecting pools that are set within the original footprints of the Twin Towers,” Brashear said.

The two waterfalls of his design are surrounded by bronze parapets inscribed with the 2,983 names of the men, women and children killed in the attacks of September 11, 2001 and the earlier bombing on February 26, 1993.

Brashear lived in both Washington, D.C. and New York for significant periods of time, so his own recollection is tinged with emotion. His father worked at the Pentagon when the third plane crashed into it. Amid the chaos and lack of cell phone service, Brashear couldn’t reach him and set out on foot alongside the Potomac River after parking his car at nearby Roosevelt Island. When engines from ensuing aircraft seemed almost eerily to be bearing down on the city, he thought to himself, “I’ll just jump in the river if I have to.”

Brashear’s father was not hurt in the attack. Six years later, Brashear moved to New York, where the story expanded substantially. He learned many personal stories during his time there, including those of victims and of first responders.

“It’s an incredibly important day to me and I wanted the museum to honor that day in some way,” Brashear said. “We have essentially created a chapel in our galleries, and have as the backdrop an examination of the architecture of the World Trade Center site, from its initial construction to its current configuration.”

Cooperation from the New-York Historical Society, the Library of Congress, and famed architect Daniel Libeskind, who developed the master plan for the site he called “a space to witness the resilience of America,” helped the exhibition come together quickly.

Visitors can view the timeline of the World Trade Center in sequential order, starting in the museum’s first gallery, which showcases the work of architect Minoru Yamasaki, designer of the original Twin Towers.

The next gallery focuses on relevant photographs from September 11, images made by the significant photographers of the time.

“We are not exhibiting any photos of the buildings on fire or of the buildings collapsing, and there are no photos depicting the tragic loss of life. We do not want to shine a light on the great pain of that day. Our intention is to present this history with exceptional sensitivity,” Brashear said. “But while they are not explicit, the photos we have signal the day.”

Libeskind’s plan — which balances the memory of the day with the need to move beyond it — is another key element of the exhibit.

The third gallery focuses on Arad’s reflecting pools and David Childs’ design for One World Trade Center, the innovative 104-story skyscraper that is the tallest building in the United States at 1,776 feet.

“The site has truly become amazing in its rebuilding,” Brashear said. “Michael Arad’s reflecting pools are monumentally sublime. I don’t think anybody could have conceived of anything better than what he designed. It is perfect in so many different ways.”

Another section focuses on the Oculus, the World Trade Center transportation hub designed by Spanish architect Santiago Calatrava, derived from an earlier sculpture made by the architect, and in Calatrava’s mind resembling a dove taking flight.

The loop concludes in the center gallery that features 12 enlarged covers from The New Yorker magazine. Six show the Twin Towers before the attack and six document the site afterward.

“They offer another way to reflect,” Brashear said.

The names of nine William & Mary graduates, seven lost in the tragedy in New York and two soldiers killed in the ensuing conflicts in Iraq and Afghanistan, are presented on an honor wall.

For the younger generation, the exhibition will be an education. Most of the students at William & Mary were either not yet born or were too young to feel the impact of September 11, and they are no different from college students on campuses around the world.

“We have the opportunity to inform young people and call their attention to the day,” Brashear said. “Learning about September 11 through the lens of architecture is not the same as learning about September 11 through an examination of political science or international relations. But it does, at least, put the topic on the table. Perhaps this exhibition will encourage our young patrons to engage in additional investigation.”

“Overall, though, this exhibition is about the human spirit, and our collective resilience. There is tragedy, but there is also triumph,” said Brashear.

Visitors are encouraged to register online in advance for tickets to “Forever Marked by the Day,” as the museum is limiting the number of people in the gallery at one time. Admission is free.

The museum, located at 603 Jamestown Road in Williamsburg, is open 10 a.m.-5 p.m. Tuesday through Sunday. Masks are required.