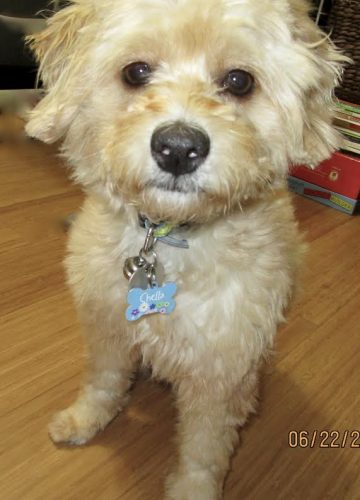 What is your pet’s name?
Chella Arabella Temple

What is the breed of your pet?
Cockapoo

How was your pet’s name chosen?
Name she had when I saw her on a pet rescue site and it was similar to my deceased daughter’s nickname of Chelle. It seemed meant to be. I was second in line to adopt Chella and as it happened the first person suffered a major health event and wasn’t able to meet Chella. I got a call from the rescue agency asking if I could allow them to do a meet-and-greet that day—Friday, May 13, 2016. It was literally love at first sight for me and Chella. It was apparent within days that she was my girl. She is now three years old and we’ve had her for eighteen months or so.

Does your pet have a favorite walking route?
Veterans Park. Chella loves the circular path that meanders for six-tenths of a mile. Being a very social creature, Chella wants to greet each dog and get rubs from anyone who finds her delightful and approachable.

What’s the most embarrassing thing your pet has ever done?
Crotch sniffing.

Does your pet have a pet peeve? If so, what is it?
She doesn’t like my grandson to pound the stairs as he runs up or down. Austin has autism and seldom has the ability to moderate is physical movements. Chella wants him to walk—not tun downstairs.

If your pet could answer any question, but just one, what would you ask?
How did you survive in the streets of Goldsboro, NC before you were picked up by animal control?