Parents of driven young athletes know there are few things worse than a season-ending injury: an ankle twists, the ligaments that give a knee its flex get pulled too far and snap, an on-field collision produces a concussion.

While those injuries are often the result of bad luck and at-play trauma, many injuries that sideline players have far less dramatic causes. Called “overuse injuries,” they’re the product of a child specializing in one sport too early, too much training, poor form, or a combination of all three.

While common, Dr. Barley says, these injuries are also easily nipped when a player is trained to listen to his or her body, and coaches and parents are paying attention to proper form and encouraging cross-training exercises to develop a strong athlete.

Something usually tips off a brewing overuse injury. The velocity may be off for a pitcher, pacing slowed for a runner, or just chronic fatigue for an athlete. These small changes, Dr. Barley says, almost always tell a bigger story. Fortunately, there’s an efficient first treatment: rest.

“Sometimes a rest isn’t the easiest thing to prescribe,” he says, noting that many athletes – and their competitive parents – consider a break in training a sure way to lose ground. Dr. Barley knows that pressure well, having played Division I college football and also as the head team physician for Christopher Newport University.

Rest, however, is an easy way to see if the symptoms improve.

“Rest starts to give you an idea of ‘we might be dealing with a quick turnaround’ or that something more is going on,” he says.

Dr. Barley usually sees young athletes as patients when they’ve been experiencing symptoms of overuse injury – their game being a little “off” – for a couple of months. He encourages parents, who guide the treatment plan for their kids, to make the decision to get in treatment sooner than later. 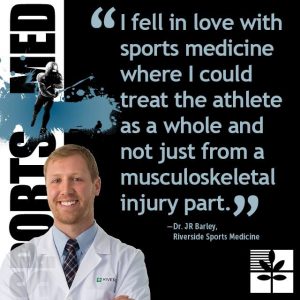 The most difficult part of helping a young athlete recover from injury is when the athlete suffers from chronic injuries because of too-early specialization, says Barley, who sees patients once a week at his office at The WISC in Williamsburg in addition to his primary offices in Newport News and Williamsburg.

“There are all of these club teams that train year-round,” he says. “We’re trying to get kids away from specialization so soon and into cross-training, or trying different sports. They may actually be better at their preferred sport if we give them breaks.”

Christopher Newport University Head Softball Coach Keith Parr sees the spectrum of eager players, from his 11-year-old daughter who plays travel ball to his nationally ranked roster of college players, to his wife who played in college and now coaches a youth team.

Parr says some of the injuries he’s seen at the collegiate level have been cumulative. The players who began as four-year-old girls just mastering hand-eye coordination to throw and catch can suffer from too much specific training for too long. Eventually, it catches up.

College softball is a long season, too, with six-day-a-week practices for 21 to 23 weeks. That sort of activity can take a toll, Parr says, and it’s critical for players and coaches to pay attention to technique, strength development, and rest so players can be successful throughout the demanding season.

Like Dr. Barley, Parr favors the early cross-training, something his daughter’s softball team is encouraged to do when their team takes a winter break.

Both Dr. Barley and Parr have seen athletes who deal with the symptoms of overuse training by ignoring them and digging in to play through it. That instinct to “gut things out” for the dramatic game can have a high price to pay, one that fans don’t see. Dr. Barley recalls a middle-school age baseball player he treated while in his sports medicine fellowship training at Wake Forest University. The boy had complained of shoulder pain and, though young, had pitched year-round for two years straight. Rehabbing the injury took a complete shutdown, with no baseball for the spring and fall seasons.

Parents and coaches, they say, need to model early on the awareness that there’s a difference between being sore and being hurt.

“In some cases, it’s the adults who need to be making better decisions,” Parr says.

Parents need to be involved, know when their young athlete needs a break, and be willing to enforce rest, Dr. Barley says. Asking their child at the end of a season how he’s feeling or whether there’s any pain and when he feels it can be a good way – and time – to address a concern before it becomes an issue.

As for the young athlete, Dr. Barley says it’s important they know their body and their limits, even as they work to push their abilities in pursuit of more success.

“Prevention is treatment,” he says, and usually requires very little down time.