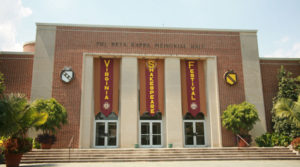 The College of William & Mary recently announced its 2015-2016 theater season, with selections ranging from classic plays to interpretive dance performances to laugh-out-loud musicals, all of which will be performed at Phi Beta Kappa Memorial Hall.

The season opens with The Blue Room by David Hare, which will run from Oct. 1 through 4.

Christopher Owens, chairman of the theatre, speech and dance department, will direct this relationship-driven drama, which he has creatively adapted to make relevant to modern audiences.

A cautionary tale of the way nothing remains private for long in a world saturated with social media, this intimate and compelling look at sexual relations between men and women is recommended for mature audiences.

Dance fans can mark their calendars for DANCEVENT from Oct. 22 through 25 and An Evening of Dance from March 24 through 26. The former is a concert of original choreography performed by faculty, the Orchesis Dance Company and guest artists, while the latter is a showcase of student choreographers presenting dances inspired by stories from their lives.

The college will be rounding out the 2015-16 line up with two comedies and a trio of tragedies.

Avenue Q, a hit Broadway puppet musical that is anything but family-friendly, and Lend Me a Tenor, a screwball comedy about an Italian opera star, promise to elicit howls of laughter.

From Feb. 25 to 28, Phi Beta Kappa Hall will house three classic Greek tragedies. Collectively known as Oresteia, these three plays by Aeschylus tell the tale of a curse on the House of Atreus.

The trio includes Agamemnon, The Libation Bearers and The Eumindes, all three of which will be directed by Richard Palmer.

“A lot of other theatre groups have their niche, but I think what makes William and Mary theatre stand out is our variety,” said Olivia Levering, the department’s promotions and box office manager. “There really is something for everyone this season.”

Tickets for all shows are now on sale at the William & Mary Box Office.

Performance times are 7:30 p.m. Thursdays through Saturdays and 2 p.m. Sundays. Tickets start at $15 for non-musical theatre and dance performances and bump up to $20 for musical theatre performances. Student, children, military, group and season pass discounts are all available.

Tickets can be purchased in person at PBK Hall or over the phone by calling 757-221-2674. They are also available online here.