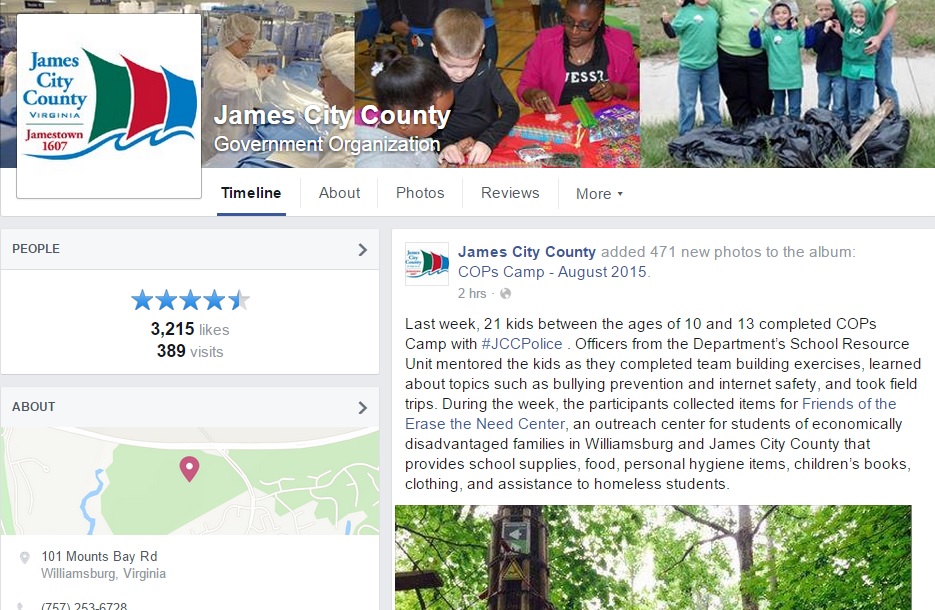 James City County is upping its social media game with reminders, news releases and a list of Top Things To Do, as well as police initiatives such as #wantedwednesday, #fraudalertfriday and #crimeoftheweek.

Inspired by the cultural phenomenon “#throwbackthursday,” a weekly event when social media users will post a photo or anecdote from the past, James City County decided to join in on the use of recurring hashtags to boost social media engagement.

“It’s not just about getting fans and followers [for our Facebook page and Twitter account],” said Renee Dallman, communications specialist for the county. “We want people to be engaged, to comment and interact with us.”

A quick scroll through the JCC Facebook feed reveals the hashtags are certainly getting people talking and sharing. Many of the hashtags are crime related, with the most popular ones tending to be calls to action for the community.

“For three weeks in a row, we’ve put out a #wantedwednesday and the person turned themselves in the same day,” said Stephanie Williams, the James City County police spokesperson. “We actually asked one guy if he’d seen it and he said yeah, his cousin saw it on Facebook and called him so he turned himself in.”

Other hashtags like #medicmonday and #firefriday run less frequently but still garner attention for various emergency-related happenings in the community.

Though Dallman estimates the crime posts are the most popular, JCC is also  trying to use social media to its advantage when it comes to promoting community events.

The Top Things To Do In James City County is a weekly list that highlights a number of area goings-on. Past “Things To Do” have included festivals, park events, musical performances, sales at local businesses and promotions at Historic Jamestowne and Jamestown Settlement.

“It’s a great source for instant info,” she said. “People are already checking Facebook, so it’s meeting them where they are.”

An Instagram account is likely to be the next major addition to the JCC social media family, Dallman said. She is hopeful the county will continue to expand and evolve its social media approach in the coming months so it can continue to tap into the most effective and up-to-date ways to reach out to residents, while also continuing to maintain all of its traditional information systems.

“We just want to encourage folks to find us,” she said. “And not just find us, but encourage them to follow us and engage.”